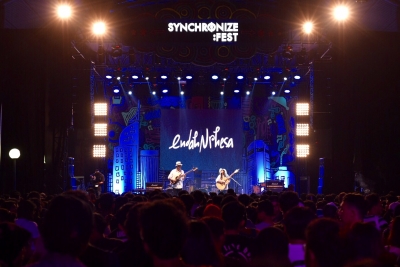 Endah N Rhesa is a duo of Indie musicians with two personnel Endah Widiastuti (guitarist & vocalist) and Rhesa Aditya (bassist). Both were met in a rock band in 2003. One year later, Endah and Rhesa decided to leave.

Both are still closely connected in the music after coming out of the rock band. Endah then back to a solo career, with Rhesa as the producer. Later, Endah and Rhesa tried to duet in an acoustic nuance project. It turns that they suitable to play music in a duo namely Endah N Rhesa, in 2005.

The minimalist acoustic music style by  Endah N Rhesa is inspired by various acoustic musicians especially from Indonesia like Anda, Bonita, Bondan Prakoso, and Cozy Street Corner. Starting from the inspiration, Endah N Rhesa continue to released a variety of simple acoustic works but still nice to listen. Every year, Endah N Rhesa regularly performs in various music stages in Indonesia and some countries such as Malaysia, Singapore, Kazakhstan, Australia, and France. Moreover, Endah N Rhesa has received many awards as a musician of alternative music gender.

More in this category: « Wiwiek Sumbogo Vika »
back to top
Home