Tradition of Carbide Cannon in Pontianak 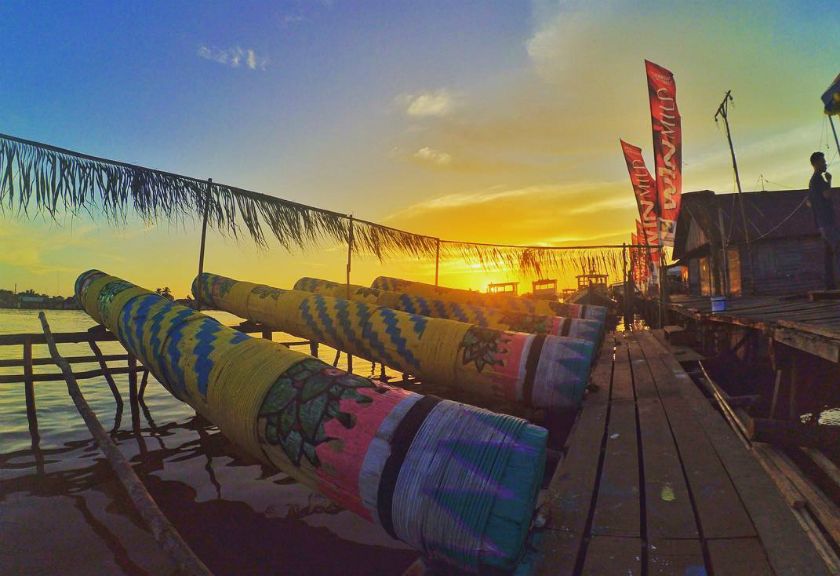 Welcome to  “Indonesian Wonder”, a daily segment featuring  tourism, culinary arts, fine arts and culture from various regions across Indonesia. In today’s edition we will introduce the Carbide Cannon Tradition in Pontianak.

In Indonesia, most Muslims have the same tradition in celebrating Eid Al-Fitr or Lebaran. They usually come home (mudik) to celebrate Lebaran, Ied prayer, Gathering and pilgrimage. Muslims also serve rice cake or “ketupat” and chicken curry or “opor ayam” as special culinary of Lebaran. In addition, Indonesia also has a variety of customs, tribes and cultures. One of the unique traditions connected with Lebaran is Meriam Karbit or Carbide Cannon in Pontianak, West Kalimantan. The Carbide Cannon tradition has an interesting history. Perhaps, in ancient times the Sultanate of Kadriah in Pontianak which was established in 1771 - 1808 rang cannon to expel the ghost. Because at that time, the first Pontianak King, Syarif Abdurrahman Alkadrie when opened the land for his residence in Pontianak was disturbed by the ghosts. Then the Sultan ordered his troops to drive the ghosts by cannon. In addition, the loud sound of the carbide cannon usually signifies the time of magrib or evening prayer for muslims .

As time goes by, the carbide cannon is lively performed for tourist attraction. The cannon is made of durian wood or coconut tree and then tied with a rope, so that the cannon does not move when thunder. Moreover the cannon is painted with interesting colors. The carbide cannon is approximately 4-7 meters long. It is perforated in the middle to ignite the fire until produce the boom sound. For one game it takes about 3-5 ounces of carbide.

The cannon that will be participated in the Traditional Carbide Cannon games must follow the requirements set by the Carbide Cannon Tradition community forum, art and culture of Pontianak. These requirements, are among others, the cannon should be decorated with various decorations, such as the background of the mosque. Therefore to make 1 cannon it is required about 3 to 5 million rupiah. The game of carbide cannon tradition is a unique game which usually perform to welcome the Eid Al-Fitr. Even the traditional game of Carbide Cannon is currently contested. It is already included in the tourism calendar and highly awaited by Pontianak people.

The Carbide Tradition Game located along the banks of the Kapuas River. Usually the game started since Lebaran minus 3 in the evening. The Carbide cannons are lined on two sides of the Kapuas river. Approaching magrib or evening prayer, one of the cannons is shot, to initiate as the time to break the fast. The sounding is very loud even sounded up to a radius of 5 Km. That was Indonesian Wonder for today with the topic “Carbide Cannon Tradition” in Pontianak.

More in this category: « Dugderan tradition Waruga Site in North Minahasa »
back to top
Home