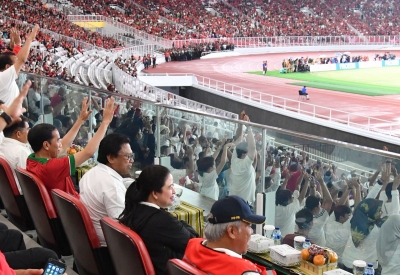 Gelora Bung Karno (GBK) Stadium now appears  more elegant with blinking red  and  white light on the outside. No more elongated seats. Currently, the stands are converted into single seaters and can be folded or flipped up and have  met the evacuation accessibility standard. Each seat can withstand loads of up to 250 kilograms and can not easily be moved or pulled out  to prevent vandalism. This  change reduced the stadium's capacity from  90,000 to over 76,000 seats.

In terms of lighting, Gelora Bung Karno Stadium is one of the best in the world. The stadium lighting system is also integrated with a powerful sound system. The grasscovering the  field surface is  of the best kind, the zoysia matrella,  equipped with an automatic sprinkler and a flood anticipation   drainage system.

Changes and luxuries of Gelora Bung Karno National Stadium at this time deserve to be the  proud of Indonesia. Moreover, many  have praised that the Bung Karno Stadium is one of the largest and most grand stadiums in the world. However, the grandeur and luxury of a Sports Stadium is not enough if not followed by good maintenance and improved performance of the athletes . What is the use of  having  a magnificent stadium without being offset by  sporting achievements?May the luxury and splendor of Bung Karno National Stadium at this time can spur the Indonesian athletes to improve their performance ahead of the grand event of Asian Games August 2018 and other international sporting events. So Indonesia is not only proud because it has a magnificent and luxurious Sports Stadium, but also  great sports achievements.

More in this category: « Coalition in Germany Echoing the 2018 Asian Games Fever »
back to top
Home