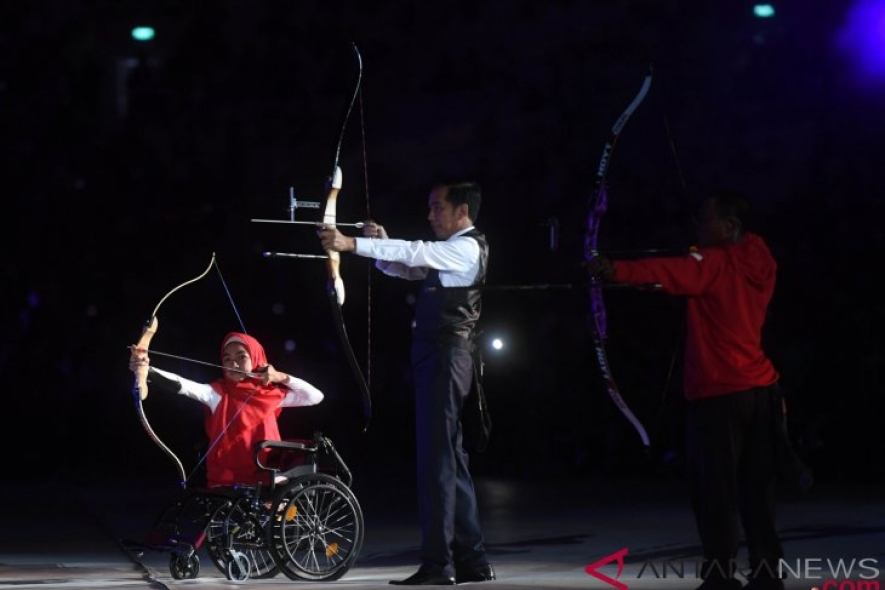 "By saying Bismillahirrahmanirrahim(in the name of Allah the most compassionate and the most merciful) I officially declare the Asian Para Games 2018 opened. Have a good fight. Good luck," he said at a ceremony held at Gelora Bung Karno Stadium.
President Jokowi moved his hands to say the words in sign language, drawing a loud applause from the audience.

"On behalf of the people of Indonesia, I say I am proud to welcome you as special guests from 43 countries," he said.

"Through the Asian Games 2018, we wish to celebrate brotherhood. We wish to show determination and achievement and we also wish to uphold humanity," he said.
The Asian Para Games 2018 scheduled from October 6-13 will compete across 18 sport branches involving 2,888 athletes with a total of 568 medals to be coveted.
President Jokowi rose from his seat and then clapped his hands, raised and moved his hands when the words "ooo ooo terima kasih" (thank you) were shown on the screen to welcome athletes when they started entering the venue for the opening ceremony.
The stage for the opening ceremony has been formed to describe an equator shown in red that passes the country, followed by the words, "We Are One" in white, which is the theme of the opening ceremony.

"We Are" refers to participants and spectators that come from the world`s biggest continent, while "One" may mean that one can become many and many can unite as one. "We Are One" reflects the country in which diversity flows in its blood.