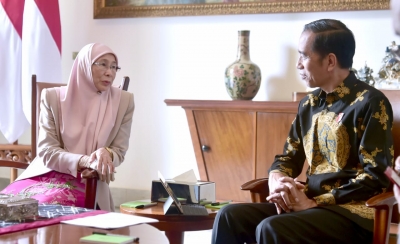 President Joko Widodo received a courtesy call from Deputy Prime Minister of Malaysia Wan Azizah Wan Ismail at the Presidential Palace in Bogor, West Java, Tuesday, October 9, 2018. The meeting was held in the President's office at around 10:00 WIB.

During the meeting the President was accompanied by Minister of State Secretary Pratikno, Minister of Foreign Affairs Retno Marsudi, Minister of Education and Culture Muhadjir Effendi, and Head of the National Agency for Placement and Protection of Indonesian Workers (BNP2TKI) Nusron Wahid. While Wan Azizah seemed to be accompanied by three delegates.

After the one-hour meeting, Foreign Minister Retno Marsudi told journalists that Wan Azizah's arrival was an introductory visit in her capacity as Malaysian Deputy PM.

"In the discussion, the point is that as the closest country, a close allied neighbor, the leaders of Indonesia and Malaysia agree to intensify communication between the leaders of the two countries, because with good communication if problems occur, it will be easier to solve the problem,"  Retno said.

According to Retno, the two leaders said that Indonesia's relationship with Malaysia was in a very good condition and needed to be improved. The President also entrusted Indonesian citizens who lived and worked in Malaysia during the discussion.

"We also talk about the issue of education for the children of our migrant workers in Malaysia," she continued.

Regarding this matter, the Minister of Foreign Affairs said that for Sabah and Sarawak now Indonesia already has a community learning center (CLC), but not for the Peninsula.

"Therefore, Indonesia requests that the community learning center can also be established or exist on the Peninsula because the number of Indonesian children living there is quite a lot," she said.