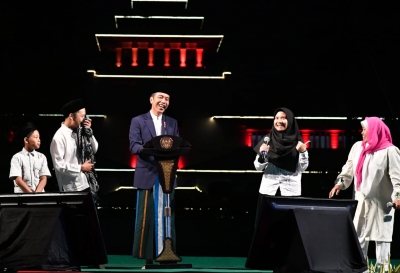 In his remarks, the President said that being a santri was to become an Islam who loved the nation, became a religious Muslim, became a santri who had a noble character and at the same time nationalist as was advocated by kiai, ajengan and ulama.

"History has noted the great role of the ulamas, the kiai, the santri in the Indonesian struggle for independence, in safeguarding Pancasila, in maintaining the Republic of Indonesia, and always guiding the path of goodness, the path of truth, to the path of progress," said the President.

Commemoration of Santri Day which was determined through Presidential Decree No. 22 of 2015 according to the President is a form of respect and gratitude to the state for the contribution of the kiai, the ulema, the santri, and all components of the nation who followed the example of the ulema. (biro pers )

More in this category: « President Joko Widodo Visits Lombok to Observe the Rehabilitation and Reconstruction Process Mt. Galunggung, a tourim object »
back to top
Home