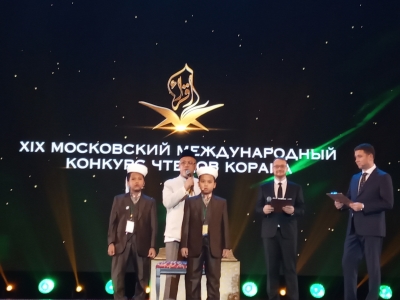 The recitation of the holy verses of the Koran brought by two young Indonesian hafiz, Muhammad Ghozali Akbar (10 years) and Kamil Ramadhan (11 years) echoed at the top of the 19th Moscow MTQ (19th Moscow International Quran Reciting Competition) hafiz or memorization of the Koran, in Moscow, Sunday (10/21). The presence of these two Indonesian hafiz as special invited guests of the Russian Mufti Council.

"We come from Indonesia to Moscow, Russia wants to give valuable things, in the form of our love and chanting of the holy verses of the Koran," said Ike Muttaqin, Chair of the De Muttaqin Waqf Foundation Yatim Tahfizil Islamic Boarding School while on stage accompanying Ahmad and Kamil.

More than 6,000 people attended the event, which is generally the Russian Muslim community in Moscow and surrounding areas that filled the Crocus City Hall building. Also present were invited guests from various backgrounds, including the diplomatic corps. (mofa indonesia)

More in this category: « Mt. Galunggung, a tourim object FM Meeting with Vice President of Panama »
back to top
Home