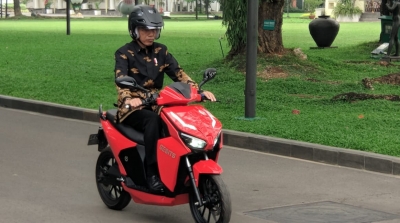 President Jokowi tried the national electric motor Gesits in the presence of the Menristekdikti and the chancellors, on the page of the Merdeka Palace, Jakarta, Wednesday (7/11) afternoon.

President Joko Widodo (Jokowi) said that the national electric motorbike of Garansindo Electric Scooter ITS or Gesits had been undergoing trials for a long time. For speed, for example, it has been tested from Jakarta to Bali, and there are no problems.

"I tried it, because there was no exhaust sound, there were no grills. So smooth and this is very environmentally friendly, "said President Jokowi after testing the Gesits electric motorbike in the courtyard of the Presidential Palace, Jakarta, Wednesday (7/11) morning.

According to the President, the national electric motorcycles will soon be produced, approximately 1 year produced 60,000 units, 1 month 5,000 units. But if the market welcomes this can be raised.

"This is the 100% Indonesian brand and principle. "Electric motorcycle," said the President.

Although 100% of Indonesia's production, President Jokowi did not think about the possibility of providing protection against the marketing of Gesits motorcycles. He just said, consumers are given choices. (info: sekkab)