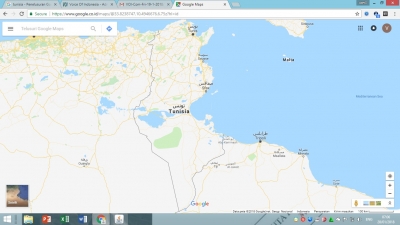 At the end of 2010, a wave of revolutions in the form of demonstrations and protests for the change of government, whether peacefully or not, struck some of Middle East and African countries. The occurrence, known as "Arab Spring", originated in Tunisia precisely on December 17, 2010. A few days later, entering the year 2011, the Tunisian government led by Zine el Abidin Ben Ali collapsed. Tunisia also experienced the most democratic transitions and political changes compared to other Arab countries, which were then also affected by Arab Spring. At that time, the ruling regime was overthrown without bloodshed and civil war.

But what happened in Tunisia last week, when commemorating the fall of the Ben Ali regime 7 years ago, was a mass demonstration against price and tax increases. Before this demonstration, a protester was killed on Monday, January 8th. The unrest prompted the government to send troops to several areas in Tunisia, and arrested nearly 800 people, including opposition leaders.

The act of protest occurred when the Tunisian government announced and provided a "new year gift" in the form of fuel price adjustment and some consumer goods starting January 1, 2018. In addition, some types of taxes and tariffs such as car taxes, telephone rates and internet also rose.

Following the demonstration, the Tunisian government also offered a social reform scheme that has been submitted to the parliament, in the form of medical care reforms, housing and assistance to the poor. So far, the government programs have not been able to overcome unemployment and poverty, including unable to restore the tourism industry, after being hit by terror attacks to foreign tourists 3 years ago. Tunisian Prime Minister, Yousef Chahed is trying to convince his citizens that 2018 is the last year of trouble in the country. But it seems that the Tunisian opposition is dissatisfied with the programs offered and urges to stage rally against the government.

The escalating violent act in Tunisia that has previously experienced a peaceful transition is alarming. The Tunisian government and the opposition should negotiate a peaceful solution. Solving the problem with the "Tunisian tradition" such as the toppling of the Ben Ali regime 7 years ago should be carried out in a bid to avoid violence, such as bloodshed that may pose casualties.

More in this category: « 3rd Reshuffle Cabinet Improving People's Productivity and Indonesia's Competitiveness through Infrastructure Development »
back to top
Home