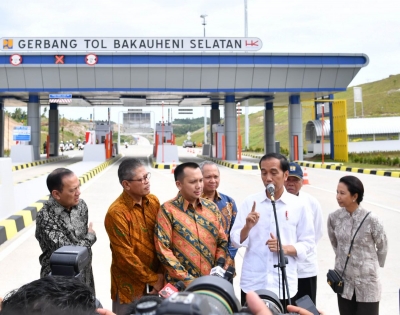 In early 2018, there are several infrastructure projects that have been built by the government, such as toll roads, railways, dams, airports, housing complex and cross border posts.

The newly-inaugurated development project by President Joko Widodo on Sunday (21/1/2018) is the initial toll road of Bakauheni-Terbanggi Besar in Bakauheni district, South Lampung regency. This is the first toll road in Lampung province.

Since their initial reins of government, even before being elected as president and vice president of Indonesia, Joko Widodo (Jokowi) and Jusuf Kalla (JK) have already launched a program called Nawa Cita or nine- priority agenda for the road of change towards being politically sovereign, economically independent and culturally personalized for Indonesia.

One of the Nawa Cita's programs is to enhance people's productivity and competitiveness in international markets so that Indonesian nation can move forward and rise in a bid to be equal as advanced Asian nations. This can be done by building infrastructure not only in Java but also outside Java, such as Sumatra, Kalimantan, Sulawesi and Papua.

The existence of infrastructure is believed to speed up economic growth and reduce regional inequalities. In addition, the infrastructure development must be carried out to win the competition against other countries.

What the government of Joko Widodo and Jusuf Kalla has done is worth being supported by all stakeholders. All of the toll roads, airports, and seaports can all be a means of pressuring prices and accelerating the flow of logistics. This will greatly affect Indonesia's competitiveness internationally. (Trans by Rhm)

More in this category: « Crisis recurs in Tunisia National Food Policy and Data Accuracy »
back to top
Home