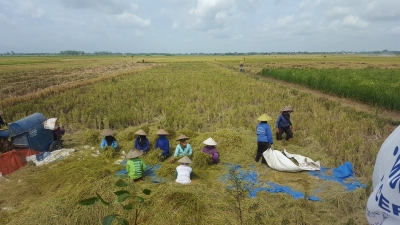 Food, especially rice has remained the main need of Indonesian people up to now. Thus, food sovereignty becomes one of the agendas in the National Medium Term Development Plan for 2015-2019.

At the Opening of the National Congress of HIPMI XV in Bandung, West Java on January 12, 2015, President Joko Widodo urged Minister of Agriculture to be self-sufficient in food within the next three years, which means this year 2018. Self-sufficiency starts from rice, and then the next one is other foods. On that occasion, President Joko Widodo believed there would be no rice import after three years.

In fact, price hike of rice has risen significantly since December 2017. Ministry of Trade decided to import rice of 500 thousand tons targeted to arrive in Indonesia by the end of January 2018. Later, the government's plan to import rice by the end of January is considered too close with a harvest that will fall in March 2017. There is a possibility that the distribution of imported rice will actually make the rice farmers disadvantaged.

Quoting the report of liputan6.com on January 16, 2018, rice import is conducted to ensure the availability of rice supply across Indonesia and reduce the price of rice in the market. The price of rice has risen because of inaccurate rice production data. An agricultural observer of the Faculty of Agriculture at Bogor Agricultural Institute, Prof. Dwi Andreas Santosa views that the price hike of rice can be overcome if the available data is accurate. So far, the rice prices have often risen because production data and consumption are not correct.

Meanwhile, member of Indonesian Ombudsman, Ahmad Alamsyah Saragih stated that the Ministry of Agriculture stated that so far the production of rice is surplus and stock is enough. However, the statement is based only on estimates of harvested area and grain production, without concrete amount and distribution of rice stocks.

Actually, the data believed to be accurate, especially related to the availability of rice, can be seen from price movements. The basic principle taken is a balance between demand and supply, which is generally applied. The more rice stock is, the lower the rice price is, and vice versa. Inaccurate data related to national rice stocks needs to be fixed immediately, because this has the potential to make the government take wrong policies. In regard to this, the Ombudsman advised the government to provide strong support for the Central Bureau of Statistics -BPS in a bid to issue more accurate data on rice production and stock.

It is time for the government, mainly the Ministry of Agriculture, to evaluate the data sources used as the basis of national food policies. The policies should be based on research results according to the facts on the field instead of estimate only. So, there will be no more policies that may make the farmers disadvantaged.

More in this category: « Improving People's Productivity and Indonesia's Competitiveness through Infrastructure Development US DEFENSE MINISTER’S VISIT TO INDONESIA »
back to top
Home