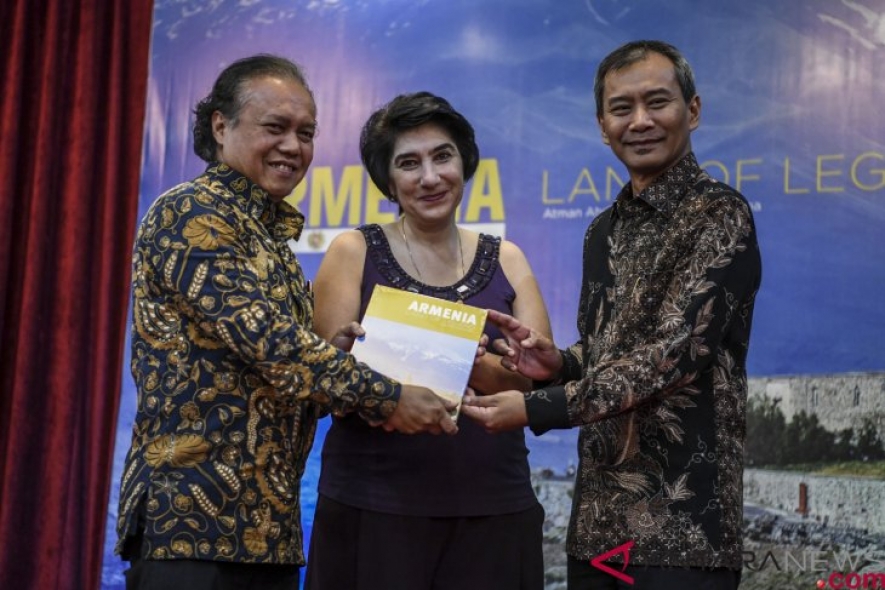 The Armenian Embassy in Jakarta, in collaboration with the Antara News Agency, launched a photo book entitled "Armenia: Land of Legend" at the Adhiyana Auditorium, Wisma Antara, on Tuesday (Jan 15) to introduce Armenia to the Indonesian people."Geographically, Armenia`s population is indeed small when compared to Indonesia. It also has almost no historical connections. But the real challenge is to explain the wealth of natural beauty and Armenian culture to the Indonesian community extensively," Director of Antara News Agency Meidyatama Suryodiningrat said in Jakarta, on Tuesday.Suryodiningrat hoped that the photo book could be a source of enlightenment describing the wonders of Armenia, which would trigger the interest of the Indonesian people to better understand the potential of the two countries.However, the real challenge for introducing the country, which is bordered by Turkey to the west, Georgia to the north, Azerbaijan to the east, and Iran to the south, lies on how the information on the richness of Armenia`s natural beauty and culture can be introduced to the people at large in Indonesia.With a total population of around three million and a size of Indonesia`s Central Java Province, Armenia, which is a landlocked country in the South Caucasus region of Eurasia, is still absent on the radar of average Indonesians who possess information on the world`s economic super powers.The Ambassador of Armenia to Indonesia, Dziunik Aghajanian, also hoped that the photo book could become an entry for Indonesian people who did not know Armenia comprehensively."Despite the historic presence of Armenian community in Indonesia throughout several centuries, nowadays, for many Indonesians, Armenia is an unknown terrain. I hope this book will be an introduction for those whose inquisitive mind will draw them to this hidden jewel called Armenia, one of the ancient countries, and its people rich in history, culture, and traditions," the ambassador stated.The book, the ambassador noted, would attract them to visit this small nation with a warm heart and open mind, renowned for its hospitality, very tasty gastronomic culture, and exceptional creative mind that is depicted in the innumerous monuments dotting the scenic beauty of the land."Armenia: Land of Legend" is called a photo book because around 70 percent of its content showcases selected photos, while the remaining presents articles about the richness of the Armenian history, culture, and scenic beauty.In writing this photo book, Antara`s senior photojournalist Hermanus Priatna remarked that he and his colleague, Atman Ahdiat, have attempted to make a breakthrough. A photo book generally looks more like a catalog, whose content is fully filled with photos with less explanations about the images, making it lack in variety, or monotonous."Instead, this 105-page photo book is drafted journalistically and completed with articles describing the visual pictures of a variety of Armenian objects, including the country`s historical remains and interesting tourist sites and attractions," Priatna explained. (ant)