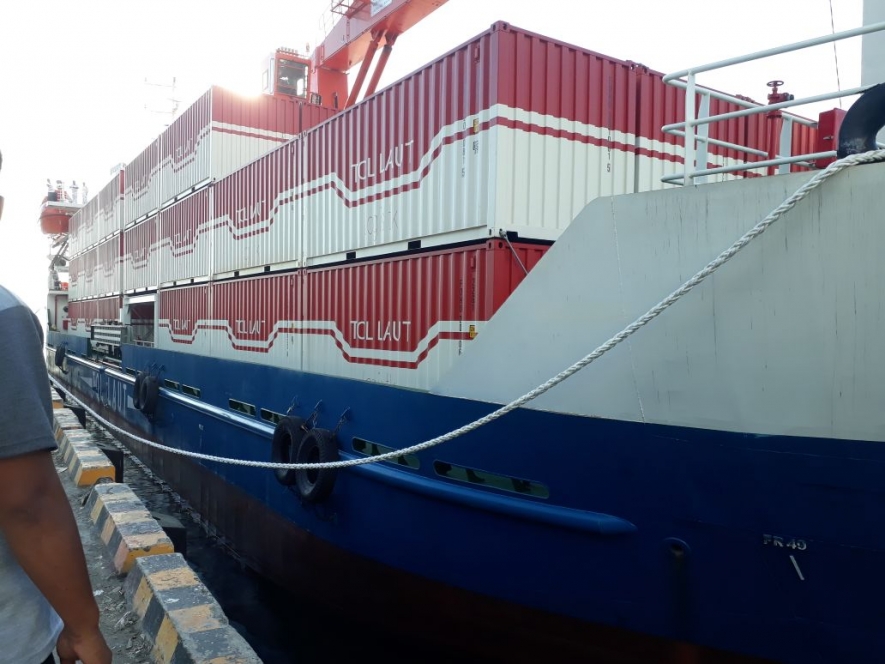 kapal kontainer tol laut ksp.go.id
The sea toll program is crucial for Indonesia, which is one of the world`s largest maritime countries, with some 5.8 million square kilometers of sea territory, while its land territory covers only 1.9 million square kilometers. Moreover, the largest archipelagic nation in the world has some 17,480 islands, and its coastline is some 92 thousand kilometers long, making it the second longest after Canada.

The administration of President Joko Widodo (Jokowi), which aims to develop the country into a global maritime axis, has come up with the sea toll road concept that will improve ports and shipping in order to facilitate the transport of goods across the archipelago.

The sea toll road service, operational since 2015, is expected to help reduce the high price disparity between eastern and western Indonesian regions, which is so far caused by expensive shipping freight costs, as almost every ship returning from remote areas is empty or carries no freight. The Transportation Ministry organized a national seminar on marine toll aboard MV Dorolonda at the Tanjung Perak Seaport, Usrabaya, on February 4, 2019, to discuss the implementation of sea toll services.

The seminar, themed, "To Improve Connectivity, to Open Logistics Supply Routes, and to Reduce Goods Price Disparity", was held in cooperation with the organizing committee of the National Press Day 2019.

Marine toll has a significant function for Indonesia, as waters constitute three-quarters of its territory, according to Captain Wisnu Handoko, director of marine traffic and freight of the Transportation Ministry, while speaking at the seminar.

The Jokowi administration has developed marine tolls to ensure the smooth supply of goods in remote areas and to lower the prices of commodities and goods in the outermost regions.

Minister of Trade Enggartiasto Lukita said at the seminar that the sea toll road program has indeed managed to reduce the price disparity of basic commodities in the eastern part of Indonesia.

"Some people express hesitation over the sea toll road program. But President Jokowi continues to implement the program," Lukita stated.

If price disparity between eastern and western Indonesia still existed, justice failed to materialize, he remarked.  The minister, however, noted that there was still an ego-sectoral among agencies or institutions over the implementation of the sea toll road program.

Therefore, the coordination among institutions was necessary, particularly for loading and unloading and getting accurate information about the needs and potential of an area.

Minister of Transportation Budi Karya Sumadi revealed that the prices of basic commodities in the eastern part of Indonesia had dropped 15-20 percent on average. He noted that the government would distribute 50 ships for state-owned companies and 50 ships for the private sector this year.

The sea toll road has the potential to seize the air cargo market because the price is competitive, the minister explained.

Sumadi and Lukita earlier signed a declaration of MV Dorolonda regarding a sea toll program ahead of National Press Day 2019.

The declaration, signed aboard MV Dorolonda at the Tanjung Perak Seaport, contains several measures that should be taken to improve the sea toll program introduced by Jokowi back in 2015.

Of the various measures, the first is urging various parties to get involved in this mode of transportation to support immediate digitalization of the sea transport process and system, so it can be more effective, efficient, and transparent.

Second, it is deemed necessary to disseminate information over the sea toll program to the public through more creative and innovative methods.

Third, it is important to improve the quality of port services and reduce the tariff for loading and unloading cargo at the port.

The fourth is to conduct re-mapping and continue the sea toll concept in future by involving all parties, including the private sector and regional government, through the sea toll.

The fifth is to request that the implementation of the sea toll system would consider and include existing public shipping, so that they become an integral part of the sea toll node.

The Ministry of Transportation has vowed to continue to improve the effectiveness of the sea toll program to improve the national connectivity and further reduce price disparities in eastern Indonesia. (ant)