US DEFENSE MINISTER’S VISIT TO INDONESIA 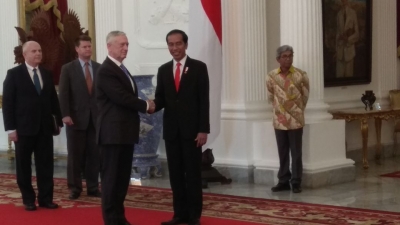 US Defense Secretary James Mattis made a working visit to Indonesia amid efforts to resolve the conflict in Asia.

During his visit in Jakarta, after received by Foreign Minister Retno Marsudi, James Mattis immediately met his counterpart Defense Minister Ryamizard Riyakudu. A number of issues became the attention of both government officials. As stated by Minister Ryamizard Ryacudu, they discussed among others, the two countries cooperation, North Korea, South China Sea, and Rohingya.

Against these issues, Indonesia and the United States generally can be said to have the same view. On North Korea, for example, Indonesia also hopes that Pyongyang will stop its nuclear test. Related to Rohingya refugees, like Indonesia, the United States sees the need for handling efforts with attention to the human side.

The United States Defense Secretary also pays attention to trilateral talks between Indonesia, Malaysia and the Philippines. James Mattis expressed the US commitment to support the three countries' defense cooperation in Southeast Asia, especially in handling the entry of ISIS into Southeast Asia. Washington's support was made on the similarity that terrorism should be prevented from spreading.

James Mattis' visit to Indonesia, in addition to being viewed from the perspective of various issues, has also become important regarding the follow-up of bilateral cooperation in the field of defense. As is known, Indonesia and the US have agreed on defense cooperation through the Join Statement in Comprehensive Defense Corporation, signed in October 2015, when President Joko Widodo visited Washington. The commitment of the cooperation was reaffirmed when President Jokowi met President Donald Trump on the sidelines of the G 20 summit in Germany last year.

It is within this framework that the visit of James Mattis to Jakarta this time can be seen as strategic enough to enhance mutual understanding between the two countries . Particularly in the form of defense dialogue and enhance the cooperation that is realized in concrete activities.

More in this category: « National Food Policy and Data Accuracy Breakthrough of KPK early 2018 »
back to top
Home