Indonesia Encourages Women to Become Agents of Peace and Tolerance 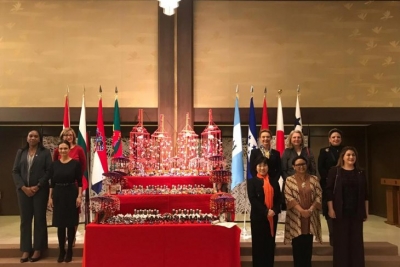 Indonesian Foreign Affairs Minister Retno Marsudi, at the 5th World Assembly for Women (WAW!), encouraged women to become agents of world peace and tolerance, noted the Ministry's written statement issued and received here, Monday."I strongly believe in the power of women's involvement in promoting peace. Let us work together to promote the role of women as the agents of peace and tolerance," Minister Marsudi remarked at the 5th WAW! in Tokyo, Japan, that was attended by the vice president of Panama and women foreign ministers from eight countries.At the meeting, Indonesian Foreign Minister Marsudi expressed strong belief that women have high qualities of leadership, empathy, protection, and solidarity, so they are able to serve as effective agents of peace.The minister emphasized that those qualities are well represented by Prime Minister of New Zealand Jacinda Arden in her approach and handling of the terror attacks in Christchurch last week."The steps taken by Prime Minister Arden to address the shooting tragedy in Christchurch demonstrate great empathy that is able to boost the people's solidarity, and she is able to perform her role as the 'mother' of the nation," Marsudi stated.According to Minister Marsudi, Prime Minister Arden's leadership has demonstrated that women, in fact, have the ability to be actively involved and contribute to peace.Furthermore, Minister Marsudi highlighted the importance of increasing women's participation and empowerment, especially as negotiators and mediators. In this regard, Indonesia and the ASEAN will hold Regional Training on Women, Peace, and Security for women diplomats from all ASEAN countries. The program is expected to create a momentum for establishing a network of women negotiators and mediators for peace in Southeast Asia.Minister Marsudi also urged women ministers to take similar actions in their respective regions in order to build the capacities of womankind as peace negotiators and mediators."I believe women negotiators and mediators will give deeper contribution to maintain global peace and stability," Foreign Minister Marsudi remarked.The 5th WAW! Meeting was held by the Government of Japan in cooperation with Women 20, an engagement group of G-20 that promotes the issues of women's empowerment, gender equality, and inclusive development in international economics. The WAW! Forum is an embodiment of Japan's commitment to mainstreaming gender issues and women's empowerment in various sectors

More in this category: « Construction of East-West MRT Corridor to Start This Year VP Discusses Plan to Build Indonesian Hospital in Hebron »
back to top
Home