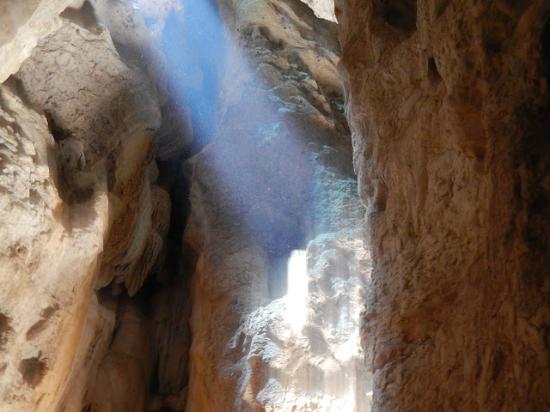 Like an incident in a science fiction, Batu Cermin cave which is also called Watu Sermeng by local people, is able to reflect light on the stone’s wall to another area in the cave, like a miror. The cave is unlike other caves, is able to muffle sound, so there is no echo which is caused by the sound. The cave can be accessed from Labuan Bajo and takes around 15 minutes by using car or motorcycle. Its road is relatively smooth.Along the street, your eyes will be spoiled with green hills and trees. At Batu Cermin cave, visitor can find a restaurant and parking area which is quite wide. After buying ticket, visitor should walk around 300 meters to access the cave. You do not have to worry to get bore because there is a cluster of shady bamboo trees which will spoil your eyes. Sometimes, the visitor will see monkeys which are hanging on tree or sitting at the left and right of the road.Batu Cermin cave got attention for the first time by the world in 1951 due to archaeologist research who was also missionary from the Netherlands, Theodore Verhoven. Million years ago, the cave’s position was under the sea. In the past, there was earthquake, so that some regions on Flores island sank. But there was also some regions arose to the surface, one of them is Batu Cermin cave. The reflection of the sun at the valley can light up around 60 percent of the cave. But this moment does not happened every day, it depends on the movement of the earth and position of the sun. The reflection of the light which enters the cave becomes original name of the cave. A 20-30 minutes tourism activity in Batu Cermin cave will make the visitor to rememember the past story of Flores by witnessing historical heritages such as animals’ fossil and coral reefs that are still protected. This uniqueness makes this tourist attraction never empty of visitors, both domestic and internatonal.