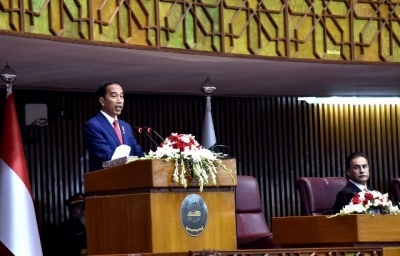 With democracy, political stability in Indonesia can be maintained. With democracy, Indonesia's economic growth is strong enough above 5% every year. With democracy, Indonesia's economy is one of the 20 largest in the world. Those statements were conveyed by Indonesian President Joko Widodo when speaking at the National Assembly of Pakistan on Friday night, January 26, 2018. The President also ensured that this economic growth can be enjoyed by all Indonesian people. In addition, what is needed is a commitment, a strong commitment of all elements of the nation, a commitment to tolerate diversity awake, a commitment to mutual respect for democracy to function properly. At the beginning of his speech, the President said that it was an honor for him to be able to speak before the Joint Session of the Parliament. On June 26, 1963, President Soekarno addressed the Pakistani Parliament and at that moment he boosted the spirit against colonialism and sparked the spirit of cooperation of newly independent nations. According to Joko Widodo, the friendship of Indonesia and Pakistan is not the friendship that just happened yesterday. Indonesia, said the President, will not forget the support of the people of Pakistan against the struggle for Indonesian independence. In addition to friendship, there are many similarities between the two countries. Indonesia and Pakistan are two large Muslim states. // (Release of Protocol, Press and Media of the Presidential Secretariat)

More in this category: « Indonesia-Pakistan Believed to Encourage Cooperation of the Islamic World After meeting Pakistani PM, President Joko Widodo Directly Heads to Bangladesh »
back to top
Home