Indonesia and Argentina Agreed to Increase Cooperation in Trade, Investment and Agriculture 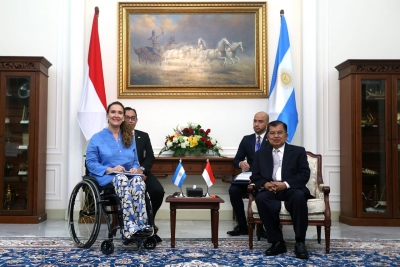 This was Vice President Argentina's first visit to Indonesia since the opening of diplomatic relations on 30 June 1956. In addition to the Argentine Ambassador in Jakarta, Ricardo Bocolandro, several high-ranking officials from the Ministry of Foreign Affairs, the Ministry of Agriculture and the Argentine Trade Ministry also participated in the meeting with Kalla .

In this meeting, the two Vice President agreed to increase cooperation in the fields of trade, investment and agriculture. Vice President Kalla explained that Argentina is the second largest trading partner for Indonesia in the South American Region and Indonesia wants to continue to increase trade with Argentina.

In 2018, the total trade between the two countries reached US $1.68 billion, with a deficit reaching 1.2 billion on the Indonesian side. "I encourage that we can achieve a more balanced and mutually beneficial trade," said Vice President Kalla.

To achieve this, Indonesia offers Indonesia's strategic industrial products, namely aircraft produced by PT. Indonesian Aerospace. In addition, Vice President Kalla also requested that Argentina continue to reduce various trade barriers both tariffs and non-tariffs. In order to balance the trade balance, the Vice President requested market access for Indonesian fruits, such as tropical fruit and beans which are competitive in the Argentine market.

In agriculture, Indonesia and Argentina have established a Working Group on Agricultural Cooperation (WGAC) which has produced a collaborative action plan. In this field, Indonesia wants to develop cooperation related to the development of agricultural technology systems.

This was welcomed by Vice President Michetti who acknowledged the enormous potential of cooperation in the field of trade and investment, and wished to translate this potential into a form of strategic cooperation.

During this visit, Vice President Michetti will also hold a meeting with Indonesian businessmen to further explore the potential of cooperation.