President Jokowi: Indonesia Can Enter the Top 4 of the World's Strongest Economy 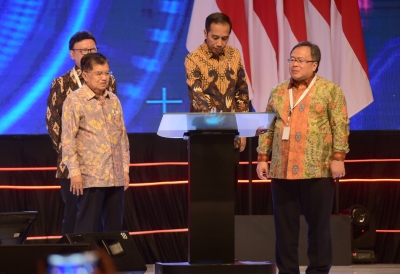 "It has a great opportunity to get there," said President Jokowi when giving a speech at the Opening of the National Development Planning Conference (Musrenbangnas) in 2019, at Shangri-La, BNI City, Central Jakarta, Thursday (9/5) morning.

He reminded, many countries are trapped into middle income traps / countries with middle income, trapped there because they cannot solve the big problems that exist in their country. Therefore, President Jokowi stressed, we must be able to solve the existing problems, which will be faced towards 2045, 100 years of independent Indonesia.

President Jokowi explained, the problem was the first, infrastructure. According to the President, this equal distribution of infrastructure must be resolved, and without this, do not think we are in the fifth, the fourth strongest economy in the world.

Therefore, the President asked the governor, regent, mayor, after the completion of some infrastructure that had been built, be it roads, toll roads, ports, airports, immediately the provinces, districts and cities connected with production points in their respective regions -one.

The second, continued the President, structural reform. According to the President, bureaucratic reform must be truly implemented. Institution must be simplified. All licensing matters from the center to the regions must be cut off.

"Without it, don't also dream of becoming the top four, the world's top five strongest economies," the President said

On that occasion, President Jokowi claimed that he had talked about licensing. But the hatch can be said to be very small.

"The people come, come, come, want, want, want, but not net, because we cannot execute and realize," the President said while pointing to examples of power plants, both steam, wind, geothermal which he said were all complicated.

Attending the occasion included Vice President Jusuf Kalla, Minister of PPN / Head of Bappenas Bambang Brodjonegoro, Minister of Home Affairs Tjahjo Kumolo, and governors, regents and mayors from all over the country. (DND / HIM / RAH / ES)

More in this category: « Special Envoy of Gambia Will Come to Jakarta Indonesia Calls for the Cessation of the Construction of Israeli Illegal Settlements in Palestine »
back to top
Home