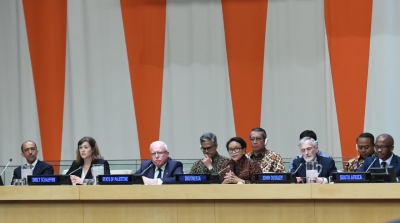 "The continued development of illegal settlements by Israel in the occupied Palestinian territories cannot be accepted," said Minister of Foreign Affairs Retno L. P. Marsudi stressed before the UN Security Council members when leading an informal meeting in the Arria Formula format with the theme "Israeli Settlements and Illegal Settlers: The Core of Occupation, the Crisis of Protection, and Barriers to Peace," at the UN Headquarters, New York, May 9, 2019.

The meeting was held by Indonesia together with Kuwait and South Africa, and was attended by Palestinian Foreign Minister Riyad al-Maliki.

In a statement initiating the meeting, the Indonesian Foreign Minister said that Israeli illegal settlements continued to increase from around 110 thousand in 1993 to around 620 thousand in 2017. This shows that the continued increase in illegal Israeli settlements is a major obstacle to achieving peace between Israel and Palestine. However, even though the current situation is very difficult, all parties cannot be discouraged. "Although the current situation is very bleak, the international community must not lose hope of being able to resolve the Palestinian-Israeli conflict through negotiations and dialogue," Foreign Minister Retno said.

First, that the construction of illegal settlements in the Palestinian territories including in East Jerusalem further diminishes the hopes of the 2-state solution.

Second, the construction of illegal settlements is a source of various violations of law and human rights against the Palestinian people.

The "Arria Formula" meeting is one form of informal UN Security Council meeting aimed at examining an issue that is considered complicated and requires a breakthrough by presenting resource experts through interactive dialogue.

The holding of a special meeting on Palestine in the Arria Formula format under the Indonesian Presidency is one form of Indonesia's special attention to the Palestinian issue, which is also one of Indonesia's priorities as a UNSC membership. The meeting was attended by all UN Security Council member states and other UN member states as well as representatives of international organizations and UN agencies.

The Arria Meeting Formula is part of the series of activities of the Indonesian Presidency on the UN Security Council in May 2019. Some other activities are the Open Debate on the UN Peace Mission, May 7, 2019, Open Debate on the Protection of Civilians during Armed Conflict, May 23, 2019, The photo exhibition that carries the theme "Investing in Peace", May 6-17 2019, as well as the DIplomatic Reception and Indonesian Cultural Show, May 30, 2019. (kemenlu)

More in this category: « President Jokowi: Indonesia Can Enter the Top 4 of the World's Strongest Economy Minister cautions against ongoing threats to national ideology »
back to top
Home