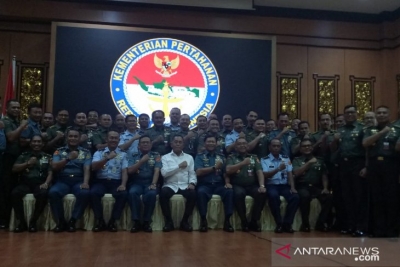 Defense Minister Ryamizard Ryacudu has appealed to heads of regional offices of the Defense Ministry to always give priority to upholding the state ideology of Pancasila and guarding against possible threats to it.

"The nation faces three threats in the form of real threats, not yet real, as well as that arising from the mindset and of the changing ideology," Defense Minister Ryacudu stated while issuing directives to the heads of regional offices of the Ministry of Defense on Monday.

In his brief, Minister Ryacudu highlighted that the state ideology of Pancasila is the fundamental basis of the nation's unifying power to protect the Unitary State of Indonesia from wide-ranging and persistent challenges and threats.

The minister pointed out that the threat of a specific mindset or ideology can be perpetrated via a small academic scope, including schools and universities.

"Hence, there is a pressing need to have in place a strong and final concept of ensuring that Indonesians gain national insight to prevent them from being easily influenced or provoked," Ryacudu emphasized.

To this end, the defense minister urged the heads of regional offices of the Ministry of Defense across Indonesia that were present at the briefing to fully comprehend their key duties along with forging deep and harmonious synergies with local government officials, regional military commands, and other security forces.

Representatives of the Indonesian Armed Forces (TNI) as well as officials of the Ministry of Defense also attended the briefing.

More in this category: « Indonesia Calls for the Cessation of the Construction of Israeli Illegal Settlements in Palestine VP: Two Solutions to Improve Indonesian Electoral System »
back to top
Home