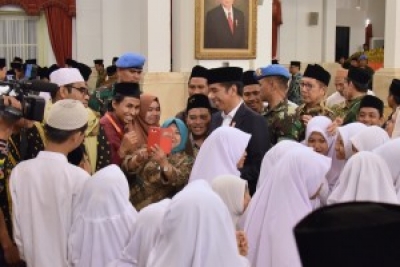 President Joko Widodo (Jokowi) said that the commemoration of Nuzulul Quran (the revelation of the Quran) had multiple meanings not only religious meaning but also had a great national meaning, for the Indonesian people.

"It does not only increase understanding but also practices national unity as part of our faith," President Jokowi said in his speech at the Nuzulul Quran Commemoration 1440 H / 2019, at the State Palace, Jakarta, Tuesday (21/5) night.

The Head of State stressed,  all Indonesians want to strengthen their commitment to carry out their duties as human beings. That human duty, according to the President, on the face of the earth is to create goodness and not cause damage.

The Head of State exemplifies the prophethood of Muhammad PBUH which, among others, is evidenced by the ability to build a social order. According to the Head of State, the Prophet succeeded in establishing a new social order, which united the Arab tribes to become a great nation and also united all Muslims in the same bond of faith.

When the founders of the Indonesian state pioneered the Nuzulul Quran Commemoration, the Head of State continued, it was to harmonize the religious spirit and the national spirit. He added that Bung Karno had traditionalized the Nuzulul Quran Celebration at the Palace.

"This is advice from our scholars, as gratitude for the gift of independence that Allah the Almighty has given to the Indonesian people. So the tradition of commemorating Nuzulul Quran in this Palace is once again on the advice of our scholars, "explained President Jokowi.

"In addition, today we commemorate Nuzulul Quran. In fact we also commemorate the legacy of the founders of our country that harmonizes diversity in the nationality frame, as (where) contained in the Pancasila," said the Head of State.

The Head of State believes, by undergoing the guidance of the Qur'an and Prophethood of the Prophet, and by taking inspiration from the nation's predecessors, God willing, Indonesia will continue to unite, continue to get along, and continue to be peaceful.

"Indonesia is better, fairer and more prosperous. And Indonesia will be a country that is baldatun thayyibatun wa rabbun ghafur.

More in this category: « Adoption of Resolution 2470 on Mission in Iraq King Salman Extends Congratulations to President Joko Widodo »
back to top
Home