President: Entrepreneurs Must Be Able To Present New Economic Centers 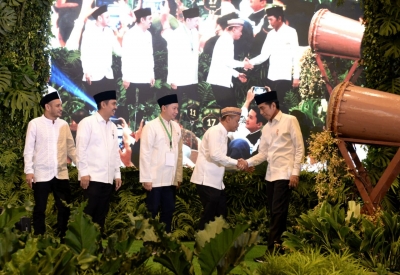 In the past five years, the government has been trying to build infrastructure evenly throughout the country. The development is primarily intended so that more regions or regions in Indonesia will become connected with each other. To that end, the President asked the entrepreneurs to be able to take advantage of the development by presenting new economic centers that made the economy more mobile.

"This is the job of the businessman to continue what the government has done by building economic centers, economic centers, which are very important for our economic growth," said President Jokowi at the Indonesian Young Entrepreneurs Association (HIPMI) and breaking fast together. orphans held at the Ritz Carlton Hotel, Jakarta, Sunday (5/26) night.

The President explained, during his tour of Indonesia from Sabang to Merauke, almost all of the regions had the same problem, namely connectivity. Therefore, a number of construction of public facilities such as roads, toll roads, airports and ports are carried out on a large scale.

"This is our big job so that in our five years our concentration has been on building infrastructure. That is so that intercity, inter-district, and inter-province connectivity can really be connected, "said the President.

At the same time, the government also sought gradual bureaucratic reform with the main goal of making the licensing process easier. According to the President, simplification of institutions is absolutely necessary in order to work more efficiently and quickly so as to minimize the overlapping of authority.

After the initial stages of national development through equal distribution of infrastructure, the government is now starting to target the human resources sector. The Head of State realizes that the development of this HR cannot be seen quickly. However, this must still be done so that Indonesia is able to jump into a developed country.

"This is a condition for the foundation of our economic fundamentals. If we don't do this, we will go into the middle income trap. Many countries are trapped there and cannot leave so that they cannot jump into developed countries, "said the President.

Therefore, the President hopes that HIPMI members and other associations can work together with the government to improve the quality of Indonesian human resources while absorbing them into the industrial world. Related to this, the government has prepared training and massive scholarships to increase national HR capabilities.

"Link and match between the industrial world and education is very much needed. I hope that later from Hipmi there will be cooperation with the existing ministries, with regions, provinces, districts and cities in the framework of human resource development so that the next five years upgrading of our human resources is truly visible, "he said.