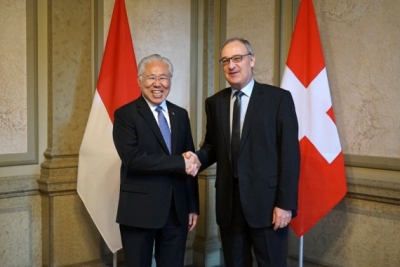 The Indonesian Minister of Trade, Enggartiasto Lukita met with the Swiss Minister of Economy, Education and Research Guy Parmelin in Bern, Switzerland, kemendag

The Swiss Federal Council has issued official documents related to the agreement comprehensive economic partnership between Indonesia and EFTA countries (IE-CEPA) and submitted to the Swiss Parliament on Wednesday (5/22) local time, for approval.

The Indonesian Minister of Trade Enggartiasto Lukita said that this step was taken by Switzerland is the result of follow-up bilateral meetings with the Minister of Economy, Education and Swiss research Guy Parmelin on May 9, 2019 then in Bern, Switzerland.

"This is good news from Switzerland and shows the seriousness of the completion of the process ratification of the IE-CEPA, while signifying that the EFTA countries (Switzerland, Norway, Iceland, and Liechtenstein) became the first group of European countries to have an agreement "free trade with Indonesia," said Minister of Trade Enggar. Indonesia and EFTA countries signed IE-CEPA on December 16, 2018 in Jakarta.

The Minister of Trade explained, this agreement would increase market access and legal certainty in the field of trade in goods and services for Indonesia and EFTA. In addition, the agreement also includes various provisions regarding investment, protection of intellectual property, elimination of non-tariff barriers, including sanitation and phytosanitary provisions, competition, facilitation sustainable trade, trade and development, and economic cooperation.

In 2018 Indonesia is included in the 40 main trading partners with Switzerland. "As is This IE-CEPA, in the future, Indonesia and Switzerland are expected to increase trade bilateral mutually beneficial. We also hope that Switzerland can increase its investment in Indonesia, "said the Trade Minister.

In addition, the Trade Minister continued, the government was committed to socializing the benefits of IE-CEPA to the public, including business people and associations in various sectors to be able to use it this agreement is for broad economic interests. (kemendag)

More in this category: « President: Entrepreneurs Must Be Able To Present New Economic Centers Ministry of Industry Encourages Industrial Cooperation 4.0 with Taiwan »
back to top
Home