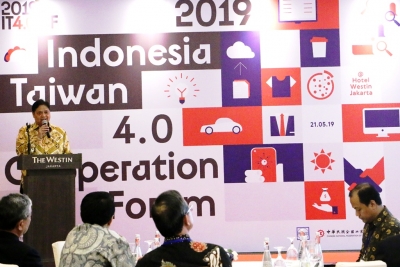 The Ministry of Industry  continues to encourage the development of technology in the industrial sector, one of its efforts is by establishing the Digital Capability Center (DCC). This digital capability center will be built as part of implementing the road map of Making Indonesia 4.0 to increase productivity and competitiveness of the manufacturing sector in the industrial era 4.0.

"The plan is being conceptualized, and in the next two years we will have DCC in collaboration with multinational management consulting firm McKinsey. This facility needs to be built along with efforts to develop the industry towards technology 4.0, because domestic devices, networks, and applications (DNA) need to be built, "said Minister of Industry Airlangga Hartarto in Jakarta on Friday (24/5).

Airlangga said that the construction of DCC would also collaborate with a technology research and development institution in Taiwan called the Industrial Technology Research Institute (ITRI). "The model might be similar to the DCC that already exists in Singapore. Further cooperation between ITRI and the Ministry of Industry, we continue to follow up, "he said.

According to Airlangga, the DCC development is expected to be utilized by industry players who have not implemented digitalization, especially the small and medium industries (IKM). Towards the industrial era 4.0, the Ministry of Industry has appointed a lighthouse industry for five leading sectors set out in Making Indonesia 4.0.

"Five major sectors prioritizing industrial development 4.0 are using sector-based approaches. In this sector, smart factory will be implemented with the implementation of internet of things (IoT), big data, digital printing and other tools that are part of 4.0 industry, "he explained.

Several companies that have become models in the implementation of industry 4.0, namely (1) PT. Indolakto for the food and beverage industry sector, (2) PT. Pupuk Kaltim for the chemical industry sector, (3) PT. Pan Brothers, Tbk for the textile and clothing industry, (4) PT. Toyota Motor Manufacturing Indonesia for the automotive industry sector, and (5) PT. Hartono Istana Teknologi for the electronics industry sector.

These companies are recipients of the INDI 4.0 award initiated by the Ministry of Industry. "Indonesia Industry 4.0 Readiness Index (INDI 4.0) is a benchmark index for industry and government in measuring the level of industry readiness to transform towards industry 4.0 in Indonesia," explained the Minister of Industry.

The Ministry of Industry believes, the application of the digital economy will be able to create new opportunities. Based on the results of research by McKinsey and PricewaterhouseCoopers (PwC), digital economics was able to increase the added value of the national Gross Domestic Product (GDP) by USD150 billion in 2025.

In fact, in 2025, Indonesia will also need as many as 17 million new technology-literate workers. So, they need new skills, including talents that are different from what they have now. In the manufacturing sector, it is estimated that there will be an increase of 4.5 million workers, while another 12.5 million are for the industry support services sector.

"Reskilling, retraining, vocational and polytechnic programs are the government's priorities," he explained. For this reason, preparing quality Human Resources (HR) is a priority program of President Joko Widodo for the second period.

In addition to collaborating with Taiwanese technology institutions, the Ministry of Industry also aims at the emergence of new industrial investments from the country nicknamed the Little Dragon of Asia. According to the Minister of Industry, the Indonesian government is concentrating on providing tax holidays and other facilities needed by investors. Especially sectors that can open up many jobs, become import substitutions, and increase exports.

"Needs in these sectors are a consideration of the government to open up investment opportunities. With this, investors can benefit from doing business, not only to meet the export market, but also to supply a broad domestic market, "he explained.

Since last year, Taiwan is exploring opportunities for cooperation with Indonesia, especially in the manufacturing sector to strengthen the economy of the two countries. Potentially collaborated sectors include shipping, metal processing, ICT & Smart City industries and food technology.

More in this category: « Switzerland Accelerates IE-CEPA Ratification Investment of 20 Billion US Dollars, Government and Inpex Agree to Share 50% of Masela's Development »
back to top
Home