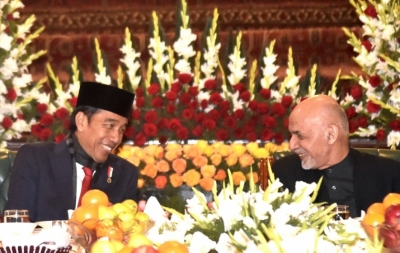 President Joko Widodo (Jokowi) has shown his sincerity with high confidence by making a state visit to Afghanistan. Ending his trip to five countries in South Asia a few days ago, President Jokowi under the tight guard of the Government of Afghanistan, has shown sympathy for the country which is being  hit by  ongoing conflicts.

As President of a predominantly Muslim country, President Jokowi has shown his sincerity in enhancing cooperation between both nations and  States. On the other hand, it also shows a great desire for peace in Afghanistan that has been plagued  by  violence and war for decades. President Joko Widodo is the second President of Indonesia visited  Kabul. Previously 57 years ago, Indonesia’s first  President, Soekarno, had  visited Afghanistan, but under different circumstances, of course.

By  visiting   Kabul, President Jokowi also showed a very high confidence amid  the violence that often occurs in the capital city of Afghanistan. A few hours before the President arrived in Kabul a bomb exploded in one of the military installations. The suicide bomb killed hundreds of people, both in Kabul and elsewhere. Although the Afghan government is much assisted by US troops, attacks are still often carried out by militants in different parts of the country. Indonesia is certainly concerned about the condition and fate of the people of Afghanistan. They actually live in a country that holds great potential of natural wealth. However, civil wars that continue to rage, has caused a very alarming condition among the people in that country.

On the commitment of President Joko Widodo to visit his country, Afghan President Sahraf Ghani, expressed his high appreciation. This was shown by presenting the Medal of Ghazi Aminullah award to the Indonesian Head of State  during a luncheon at the Presidential Palace in Kabul, Monday, January 29, 2018

The medal is a form of respect of  Afghanistan towards Joko Widodo who is considered firm and courageous in advancing bilateral relations between Indonesia and Afghanistan, especially in peace building in the country. Meanwhile, Indonesia is also grateful to the Afghan government for welcoming the Indonesian President with a very tight security, so that the state visit went well.

Whether after the visit of Joko Widodo, the conditions in Afghanistan will change for the better, all of course depends on the Afghan government and the people themselves to solve their problems. However, the President Joko Wododo's visit has at least inspired the need for a peaceful effort by the Afghans to resolve the problems within their country.( kbl )

More in this category: « Studying the economic impact of two international events at home Ease of Permit for Foreign Workers »
back to top
Home