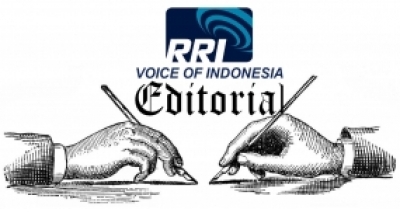 In Indonesia yesterday was the end of Ramadan month and  the arrival of Eid al-Fitr. Muslims throughout the world welcome the day with  traditions of each country or nation. Indonesian Muslims who are the majority of the population,   celebrate  it with silaturakhim. It means getting together with family and friends, asking forgiveness or forgiving each other for any mistakes in the past. In Indonesia Eid al-Fitr is characterized by the movement of people from  cities to villages. The homeward bound journey is often called “mudik”.  It is one of the largest human movement in the world.

Whatever differences between various nations, Eid Al-Fitr should be marked by a spirit of togetherness and peace. Fasting and Ramadhan worship, as taught by Muhammad the Prophet, gave guidance that fasting is to make  human morality become  better. Muslims are expected to make Ramadhan a momentum  to increase piety. To realize that  people should  understand, love, and appreciate each other because they are all  God's creations. People must live in peace and harmony,  try to find similarities in life rather than to  focus  on differences .

But the ideals of Ramadhan and Eid al-Fitr clash with the reality of the continuing conflicts, upheaval, hostility and war, among fellow Muslims. What happened in Syria is a real example. The Muslim Civil War continues. Thousands of people have died as a result of armed conflicts. In Sudan, ahead of Eid al-Fitr, there was a turmoil that killed some demonstrators.

During Ramadan, Palestinian Muslims in the Gaza Strip have become victims of Israeli military attacks.

Meanwhile, some Muslims in other part of the world  have to celebrate Eid al-Fitr within economic constraints, even poverty. Rohingya refugees of Myanmar for instance, are difficult to  fully welcome  Eid al-Fitr with great happiness in their make-shift  camps in Bangladesh.

On the other hand, it is undeniable that today many  Muslims who are part of a minority in a majority non-Muslim country can carry out Ramadan worship solemnly, and peacefully before   welcoming  Eid al-Fitr with joy.

May all  Muslims anywhere in the world can be happy in  welcoming  Eid al-Fitr. The spirit of peace and togetherness, should spread from  Eid al-Fitr.

More in this category: « Idul Fitri a Momentum to Strengthen Unity and Brotherhood World Environment Day Commemoration in Indonesia »
back to top
Home