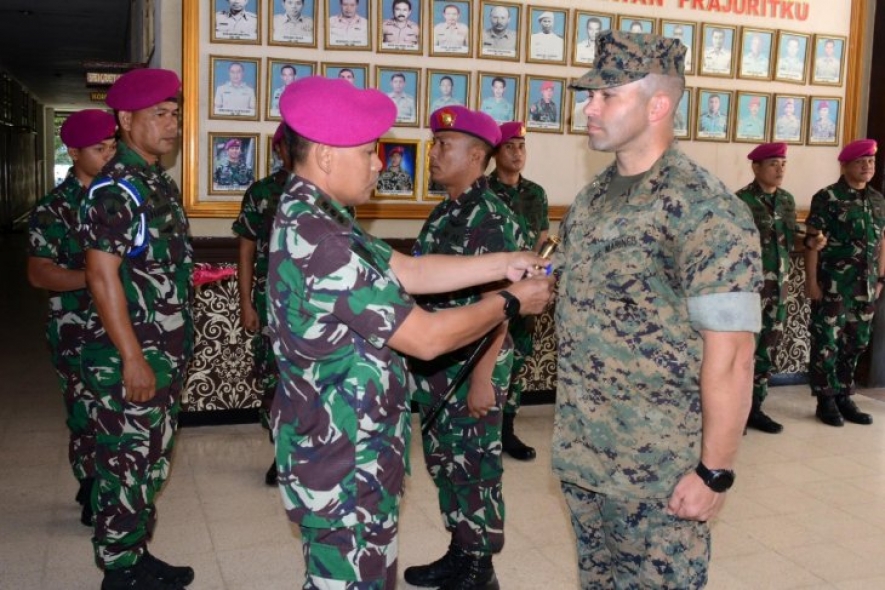 The US Marine Corps and Navy Marines held joint exercises at Bhumi Marines Base in Gedangan, Sidoarjo, to strengthen cooperation between the two militaries.The joint exercises, entitled Subject Matter Expert Exchange (SMEE) Neo and R2P2 for Fiscal Year 2019, was opened by Marine Corps Commander Major General   Suhartono, M.Tr (Han), who was represented by Marine Brigade Commander,  Colonel Agus Gunawan Wibisono.In his mandate, read out by the Marine Brigade Commander, the Marine Corps Commander said the defense cooperation between the Government of the Republic of Indonesia and the United States Government had been continuing for many years."One form of cooperation is the holding of joint exercises between the Indonesian Navy, in this case the Indonesian Marine Corps and the United States Marine Corps," he said."I am happy and quite proud, because with this training activity, the Navy Marine Corps will be able to further strengthen the existence of coaching and enhancing the capabilities of its ranks. Also, this is a form of trust given by the Unit to the Marine Corps,” said the marine corps commander.Further, he thanked the United States government for the cooperation and planning of the exercises that had been carried out previously, as well as for the Navy headquarters, that had jointly planned and prepared, so that the training could be held.To the US Marine Corps delegation, the marine corps commander expressed his welcome to Indonesia, especially at the R. Suhadi Marine Corps in Gedangan, Sidoarjo."Have the exercise, and hopefully it does not only add to an increase in ability and expertise, but also to better understand Indonesia, especially the Marine Corps, so that it can have relations that are more harmonious and brotherly and become very valuable memories," he said.Before ending his mandate, the marine corps commander stressed to all the participating marines to carry out and train with full motivation and dedication, and have a sense of responsibility, prioritizing security factors to ensure there are no accidents, while carefully following security procedures. (ant)