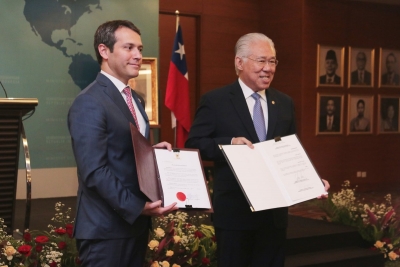 "The implementation of the IC-CEPA is a very historic moment. Besides being the first trade agreement with the South American country, IC-CEPA will also open the door for Indonesia's export products in the South American region more easily.

IoR exchange is an important legal procedure before the entry into force of IC-CEPA. In accordance with the mandate agreed in the agreement, IC-CEPA will take effect 60 days after IoR exchange, i.e. on August 10, 2019.

"I convey to Deputy Minister Rodrigo the importance of using this agreement for business people in both countries. Thus, trade between the two countries will increase. For this reason, we invite the Chilean government to jointly disseminate the benefits and opportunities of IC-CEPA. I also suggested that Chile hold a series of similar socialization on Chile by inviting the Indonesian Embassy in Santiago, "added the Trade Minister.

IC-CEPA was signed by the two governments on December 14, 2017 in Santiago, Chile. Through IC-CEPA, the two countries will get each other preferential tariffs for exports to markets other.

Through IC-CEPA, 89.6 percent of Chile's tariff posts will be eliminated for Indonesian products entering the Chilean market, while Indonesia will remove 86.1 percent of the post the tariff for imported products from Chile. The main products of Indonesia that receive preferences include: palm oil and its derivatives, paper and pulp, fisheries, food and beverages, automotive products, footwear, furniture, jewelry, sorbitol, textile products, and others.

In accordance with the agreement, after the implementation of IC-CEPA was implemented, the two countries will continue negotiations to the next stage, namely trade in the service sector and investment. "After the goods tariff agreement, the next stage is negotiations in the services and investment fields, because IC-CEPA is indeed done in stages. For the deadline, it will be discussed further through the IC-CEPA Joint Committee, which will meet according to a joint agreement, "concluded the Trade Minister.

The total trade between Indonesia and Chile in 2018 reached USD 274 million. Meanwhile, for the period January-March 2019 the total trade between the two countries reached USD 56.1 million with the value of Indonesian exports amounting to USD 34.9 million and imports of USD 21.2 million.
Chile is Indonesia's 55th export destination with total exports of USD 158.9 million in 2018, an increase of 0.3 percent compared to the previous year of USD 158.5 million.
Indonesia's main export products to Chile are footwear, fertilizer; cars, organic surfactants, locust beans, seaweed, sugar beets, and sugar cane. Meanwhile, Chile's main products exported to Indonesia are grapes, copper, chemical pulp, iron ore, fat, and oil and its fraction of fish or marine mammals. (kemendag-rel)

More in this category: « The Indonesian Minister of Trade's meeting with the Chilean Deputy Minister of Foreign Affairs President Jokowi Inducts Governor and Deputy Governor of Lampung »
back to top
Home