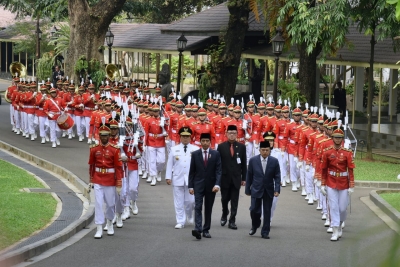 President Joko Widodo (Jokowi) inducts Arinal Djunaidi and Chusnunia Chalim respectively as Governor and Deputy Governor of Lampung for a term of 2019-2024, at the State Palace, Jakarta, Wednesday (12/6) afternoon.

The inauguration ceremony begins with the singing of the Indonesia Raya song accompanied by the Corps of Paspampres music, which was followed by the reading of the Presidential Decree No. 49 / P of 2019 concerning Ratification of the Appointment of Governor and Deputy Governor of Lampung for 2019-2024, dated May 2 2019.

After signing the minutes of the inauguration of the governor and deputy governor, the event was closed by singing Indonesian Raya songs.

Furthermore, President Jokowi and First Lady Iriana and Vice President Jusuf Kalla and Ms. Mufidah Kalla congratulated the Governor and Deputy Governor of Lampung for being invited by other invited guests.

Arinal-Chusnunia was elected in the 2018 Governor Election by outperforming the other three pairs in the 2018 Lampung regional election. In the calculation results, the couple familiar with Arinal-Chusnunia's call received 1,548,506 votes or 37.7 percent.

Arinal Djunaidi had served as the Regional Secretary of Lampung in 2014-2016, while Chusnunia Chalim was the Regent of East Lampung for the period 2016-2019.