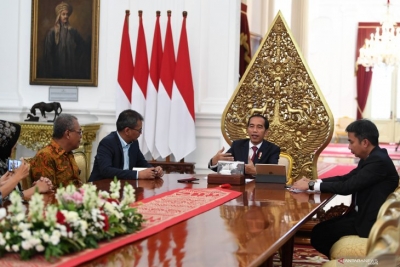 President Joko Widodo during a special interview with Antara on June 12, 2019 antara news

President Joko Widodo (Jokowi) called on the private sector to become the main engine of the national economy because the influence of the National Budget on the national economy was considered small, notably only in the range of 20-30 percent."Our RAPBN (Draft State Budget) does not significantly affect the economy, only about 20-30 percent. In fact, it is the private sector that has major impact on the economy. Hence, we have to trigger the private sector to move faster," said President Joko Widodo in a special interview with ANTARA at the Merdeka Palace in Jakarta, Wednesday.The Head of State said the government continued to encourage the private sector to be interested in investing capital or money into the real sector."So that regulations that provide incentives must continue to be given in order to encourage them to invest, especially in export oriented sectors," he said.The government also provides incentives for investment in sectors whose orientation is to replace imported goods.According to him, licensing services must be delivered as fast as possible. Indonesia would not be able to compete with other countries if doing business as usual.President Jokowi also revealed that in the five years of his future administration, he had no burden."The things that we used to see as difficult to carry out, we will do it. For the country, if we are hesitant to decide, we would just do routine things. Just, see after the inauguration," Jokowi said.He said that in the next five years there would be no burden for him, because after that he could not run again in the future elections.Meanwhile regarding the conditions envisioned after 2024, Jokowi wanted Indonesia's economic foundations to be strong."This means that instead of thinking of how big the economic growth,  we will focus on the quality of economic growth and equity," the President said.According to him, to achieve rapid or high economic growth is easy, for example by making super economic corridors in northern Java because there are already economic and industrial zones supported by ports in the region.He said the government will focus on economic equality because the country has 17 thousand islands, including Papua, Maluku, and East Nusa Tenggara, among others. (ant)

More in this category: « President Jokowi Inducts Governor and Deputy Governor of Lampung President Invites to Take Advantage of Opportunities from the Trade War »
back to top
Home