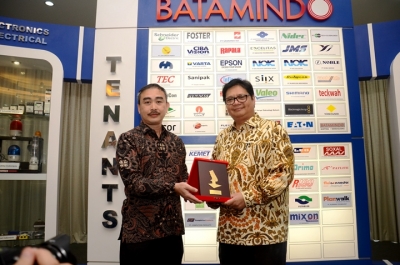 "There are four industrial estates that are included in the plan to develop halal industrial estates in Indonesia," said Director of the Directorate General of Resilience, Regional and Industrial Access (KPAII) Ministry of Industry Ignatius Warsito according to his statement received in Jakarta on Wednesday (6/12).

"The four have submitted themselves to the Ministry of Industry to develop a halal industrial area. From them, the new Modern Cikande has been launched, "said Warsito.

Meanwhile, Pulogadung Jakarta Industrial Estate plans to develop halal zones for fashion, pharmaceutical and cosmetic products, food centers, halal laboratories, and halal centers. Warsito is optimistic that there will be many companies interested in entering the halal industrial estate along with the increasing trend of using halal products.

Warsito added, in developing halal industrial estates, the Ministry of Industry has the duty to set standards, provide incentives, and facilitate promotion and technical cooperation. Later, these aspects are regulated in the Minister of Industry Regulation. Incentive aspects are also proposed in one-stop services to obtain halal certificates.

Previously, the Minister of Industry Airlangga Hartarto stated, as a country with the largest Muslim population in the world, Indonesia needs to utilize the potential of halal industrial areas. This is in line with the large demand for halal products in both domestic and global communities.

"In 2019, the government targets the achievement of the halal industry to penetrate up to USD25 billion in world trade, or up 20 percent compared to three years ago," he said.

Airlangga also said, he hoped that business people operating in halal industrial areas could support efforts to increase exports of Indonesian halal products to a number of Middle Eastern countries.

"What we can do is convince foreign markets that the process of Indonesian halal products is good," he said. Related to the development of halal products, continued Airlangga, the Ministry of Industry also continued to update several things including regarding Bonded Logistics which had been launched by the government. "One of them is the export gateway for halal food products," he concluded. (kemenperin)

More in this category: « President Invites to Take Advantage of Opportunities from the Trade War President Begins Working Visit to Bali by Observing Sukawati Market »
back to top
Home