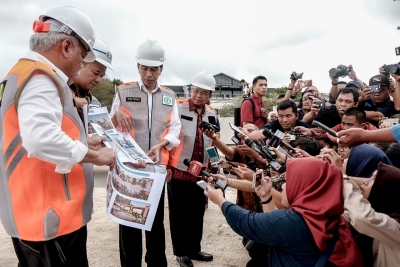 President Joko Widodo (Jokowi) during the observation of Muara Nusa Dua Reservoir Rehabilitation, Improvement and Tourism Area in Denpasar, Bali, Friday (06/14/2019), said that the 35-hectare reservoir would not only be a source of raw water for some areas in Bali include Denpasar, Benoa, Nusa Dua, and around the airport area but also tourist areas. kemenpar

President Joko Widodo wants the first estuary reservoir in Indonesia, the Muara Nusa Dua Reservoir in Denpasar, Bali, to function as a tourist attraction after the rehabilitation and arrangement project was completed later this year.

"Not only the function of raw water, but also for restaurants, for tourist attractions," Jokowi said.

While showing the masterplan of the reservoir revitalization project, President Jokowi said that in the future the reservoir would be a good tourist attraction.

Public Works and Public Housing (PUPR) Minister Basuki Hadimuljono who guided President Jokowi during the review added that so far many anglers had come to fish in the reservoir area. Until the future the reservoir is also potential to be used as a fishing tourist destination of interest.

The President claimed that so far when the reservoir revitalization project had reached 80 percent, the process was relatively satisfying. "I think the right arrangement is good," he said.

The Muara Nusa Dua Reservoir was built in 1996, which is the estuary of Tukad Badung with a river flow length reaching 19.6 km with a watershed area of ​​40.95 km2.

The Rehabilitation of Reservoir is based on emerging problems including very high sedimentation in the reservoir, reduced effective storage, meeting the increasing need for raw water, and the amount of waste entering the reservoir area so that water quality decreases.

More in this category: « President Begins Working Visit to Bali by Observing Sukawati Market Impact of Trade War, Indonesia Has Opportunities »
back to top
Home