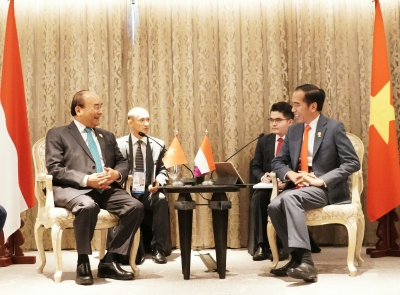 President Joko Widodo (Jokowi) pushed for the completion of negotiations on the Exclusive Economic Zone (EEZ) boundary between Indonesia and Viet Nam when meeting with Prime Minister Viet Nam Nguyen Xuan Phuc on the sidelines of the ASEAN 34th Summit in 2019 at Bangkok Athenee Hotel on Saturday (22 / 6).

In the bilateral meeting, the Prime Minister of Viet Nam directly conveyed his congratulations to President Jokowi for the process and results of the General Elections in Indonesia.

During the meeting, the President conveyed that the issue of EEZ always arose during a meeting between Indonesia and Viet Nam. Therefore, the President hopes that these problems can be resolved soon because they have the potential to cause problems.

"The recent incidents between the sea security authorities of the two countries have been one of the impacts. For that, I hope that Your Majesty can instruct the Viet Nam technical team to be able to immediately finalize the EEZ negotiations, "said the President.

In the meeting, President Joko Widodo also expressed his appreciation for Viet Nam's support for the development of the ASEAN Outlook on the Indo-Pacific which will be adopted at this summit.

"The ASEAN Draft Outlook on Indo-Pacific cooperation has been discussed for a long time. With the support of Viet Nam, this concept will be adopted at this summit, "said the President.