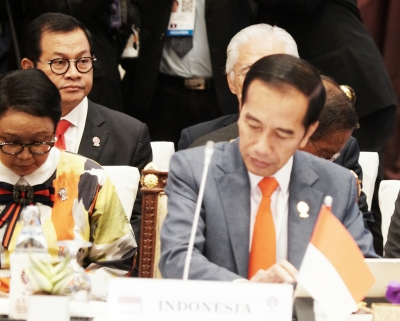 President Joko Widodo (Jokowi) reminded that the trade war between the United States (US) and the People's Republic of China (PRC) is not impossible to spread everywhere, and can have an impact on stability and security of the region.

To that end, President Jokowi reminded the need for efforts to strengthen the economic building of ASEAN countries individually and collectively

The statement was conveyed by President Jokowi at the Plenary Session of the 34th ASEAN Summit as quoted by Minister of Foreign Affairs (Menlu) Retno Marsudi at a press conference at the Atlete Hotel, Bangkok, Thailand, Saturday (6/22).

"This means that intra-ASEAN trade must be strengthened, trade facilitation becomes more important, and MSMEs are reminded that they must benefit from ASEAN economic integration," said President Jokowi.

The Foreign Minister added, on that occasion, President Jokowi also stated that cooperation with ASEAN partners had become more important. The President reminded the importance of our commitment to complete the Regional Comprehensive Economic Partnership (RCEP) negotiations among ASEAN countries this year.

In the midst of the current world situation, according to the Minister of Foreign Affairs, the President also stated that it was important that ASEAN had a outlook on the Indo Pacific issue.

"This Outlook reflects the centrality and strength of ASEAN in respecting peace, a culture of dialogue, and also strengthening cooperation," the Foreign Minister quoted President Jokowi as saying,

According to the Minister of Foreign Affairs, Indonesia expressed his gratitude for the support of ASEAN member countries in jointly developing the ASEAN Indo Pacific Outlook concept, about a year ago when Indonesia began to present this ASEAN Pacific concept. (setkab)