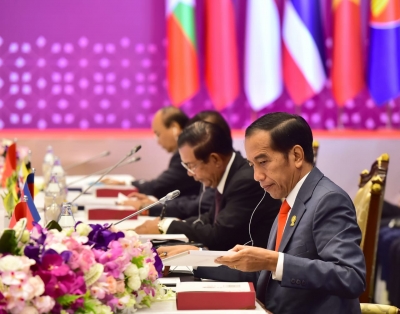 ASEAN Outlook on Indo-Pacific proposed by Indonesia was adopted by the ASEAN Summit in Bangkok this Saturday (22/6).

“This Outlook represents the centrality and force of ASEAN in upholding the principles of peacekeeping, fostering a culture of dialog, and strengthening cooperation," said President Joko Widodo at the Plenary Session of the 34th ASEAN Summit in Athenee Hotel, Bangkok, Thailand.

President Jokowi expressed his appreciation for all ASEAN countries that had made major contributions to the development of the Outlook.

The ASEAN Outlook on Indo-Pacificis increasingly relevant to the world's developments today.

“The trade war between US and China has not shown any sign of reconcilement," the President continued. “There is a concern that the trade war is growing into amulti-front war".

Further, President Jokowi said that ASEAN shall hold strong, unite, and assume its role as the motor of peace and stability of South East Asia.

In addition to the issue of Indo-Pacific, during the Plenary Session of the ASEAN Summit, the President also encouraged ASEAN to affirm their commitment to concluding the Regional Economic Partnership Agreement (RCEP) negotiations.

At the end of his remarks, President Jokowi announced that the new ASEAN Secretariat office construction had been completed and ready for inauguration on 8 August 2019, coinciding with the 52nd anniversary of ASEAN. (setkab)