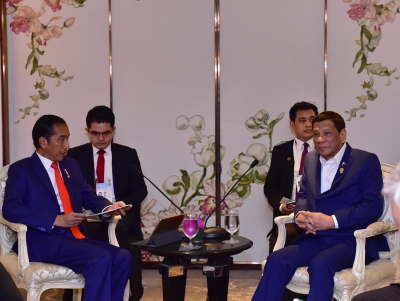 Bilateral cooperation between Indonesia and the Philippines experiences a major uplift. One of the developments accomplished is the completion of the Exclusive Economic Zone (EEZ) Boundary ratification process between both countries.

The news was conveyed by President Joko Widododuring a bilateral meeting with President Rodrigo R Duterte of the Philippines on the sidelines of the 34th ASEAN Summit in Athenee Hotel, Bangkok, Thailand, on Saturday night (22/6).

“I appreciate the smooth completion of the Exclusive Economic Zone (EEZ) boundary ratification process between Indonesia and the Philippines," said the President.

Foreign Ministers of the two countries plan to exchange the ratification documents in Jakarta next August 2019. This ratification will provide legal certainty to law enforcement and improve maritime sector cooperation.

“I suggest we each assign our team to immediately commence the negotiation on Continent Shelf," said President Jokowi.

Continuing on bilateral issues, President Jokowi communicated the plan of the country's private sector to intensify trade and investment in the Philippines.

“I also hope that Your Excellency's granting on the exemption of Indonesian instant coffee and ceramic products from the price-based special safeguard list," he continued.

Another issue discussed by President Jokowi was the Indo-Pacific cooperation. “I highly appreciate the support and contribution given by the Philippines to the development of the 'ASEAN Outlook on Indo-Pacific Cooperation'," he said.

At the beginning of the meeting, the President also expressed his appreciation for the Filipino Government's help in the release of Indonesian hostages.

“I believe Your Excellency agrees that we will continue to tighten security cooperation, including in Sulu Sea and the surrounding areas," said President Jokowi. (setkab)