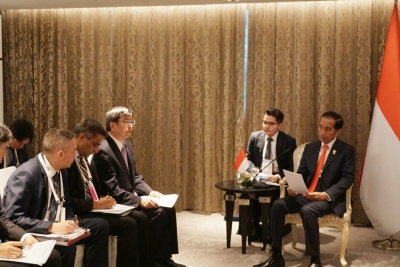 Before leaving for Don Mueang Military Base to depart for Jakarta, President Joko Widodo (Jokowi) took time to receive an honorary visit from the President of the Asian Development Bank (ADB) Takehiko Nakao, at Athenee Hotel, Bangkok, Thailand, Sunday (23/6) yesterday.

According to the Foreign Minister, the ADB President assessed that Indonesia is one example of a well-developed economy in the region. (setkab)

More in this category: « ASEAN Trust Fund and ASEAN Project Fund: Opportunities for Youth Contribution in ASEAN Patimban Port is Targeted to Operate in Mid 2020 »
back to top
Home