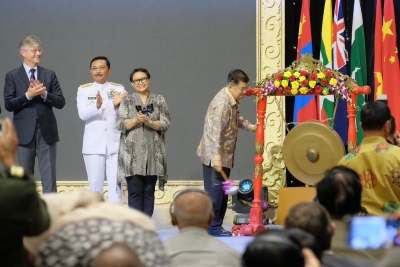 Vice President, Jusuf Kalla, opened the conference, emphasizing the important role of the armed forces in determining the effectiveness of the peace mission on Tuesday in Jakarta."As a multinational force combined with various UN member states, the effectiveness of UN peace missions will be determined by the effectiveness of the contributing countries themselves. Although I also have to emphasize that 'peacekeeping is more than the sum of its parts'," said the vice president in his speech.According to Kalla, the armed forces are the backbone of the UN peacekeeping mission, which needs to be developed continuously.The UN peace mission requires modernization that is not only limited to technology, as well as modern doctrine, but also to the capabilities and capacities needed by peacekeepers."(These include) things like the ability to establish good relations with the local community, or an adequate understanding of international humanitarian law," said the vice president, citing "soft skills" needed by the armed forces to understand their mandate and work environment.The capability and ability of "soft skills" of the peacekeepers said that the vice president must be able to win sympathy from the people on duty.The vice president appreciated the conference as an opportunity for a number of countries to exchange ideas and prepare to be effective in the 21st century."Because peace cannot be maintained by force; it can only be achieved with understanding," said the vice president.

Navy Chief of Staff, Admiral Siwi Sukma Adji, said that as many as 29 countries and one regional organization attended the International Conference on the Preparation of the Modern Armed Forces for the Maintenance of Peace in the 21st century. "Also present were speakers who were international figures in the field of world peace missions," Admiral Siwi said in his remarks at a conference jointly held by the National Defense Forces  (TNI) and the International Committee of the Red Cross (ICRC).He hoped this activity would emerge as one of the positive contributions of Indonesia and the entire country to a more peaceful and prosperous world. (ant)

More in this category: « Indonesian Economy Grows Consistent from Year to Year President Jokowi Receives President of Argentina »
back to top
Home