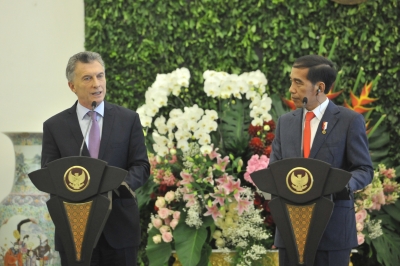 President Joko Widodo and President of the Republic of Argentina Mauricio Macri held a bilateral meeting with delegates from each country. The meeting was held at the Presidential Palace in Bogor, West Java, on Wednesday, June 26, 2019.

The bilateral meeting was held during a series of state visits by President Mauricio Macri with Madame Juliana Awada to Indonesia. In the bilateral meeting, the two countries discussed various matters, mainly increasing cooperation in two fields, namely trade and investment cooperation, as well as cooperation between people to people contact.

"Argentina is Indonesia's second largest trading partner in South America. Earlier we discussed the improvement of economic cooperation, especially in the fields of trade, agriculture and strategic industries. We discussed various efforts to balance trade between the two countries including counter trade," said President Jokowi in joint press statement.

"President Macri will then discuss with the leaders of PT. DI and PT INKA this afternoon to get a clearer picture," he continued.

In addition, President Jokowi also expressed the need to open Indonesian agricultural commodities that could enter Argentina, either in the form of zalacca, mangosteen, pineapple and others. To that end, President Jokowi encouraged steps to bring Indonesian businessmen closer, including by inviting the participation of Argentine businessmen at the Indonesia Trade Expo.

"Indonesia also continues to push for increased trade cooperation with MERCOSUR, the largest trade bloc in the South American Region which consists of Argentina, Brazil, Paraguay and Uruguay," he explained.

Meanwhile, to increase cooperation in the fields of education, trade and investment, today in a separate place, a memorandum of understanding (MoU) was signed in the field of education, then a Joint Ministerial Statement on the Establishment of the Working Group on Trade and Investment.

President Macri said he was very pleased with the warm welcome from President Joko Widodo and First Lady Iriana Joko Widodo during his first visit to Indonesia. He also welcomed the various collaborations carried out by Indonesia and Argentina and assessed their potential to be very large.

"I am here to emphasize that there is enormous potential in the relations between Indonesia and Argentina and we want to develop it, deepen it in trade and cultural relations. This is very important progress and this must be two-way," said President Macri.

In the field of people-to-people contact, President Jokowi raised the issue of visa policies that were considered difficult for Indonesian citizens.

In response to this, President Macri promised to immediately improve the visa system so that the flow of Indonesians and Argentinians visiting each other could increase.

"Because these are two countries that are very beautiful and full of culture," he said. (setkab)