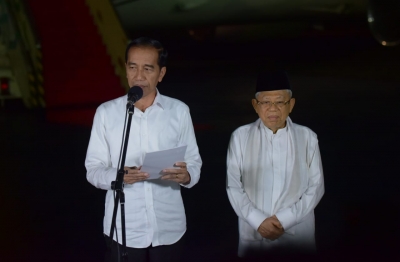 The General Elections Commission (KPU) had declared Joko Widodo (Jokowi) and K.H. Ma'ruf Amin as Indonesia's president-elect and vice president-elect  for the period of 2019 to 2024 by an open plenary meeting at the KPU office building here on Sunday."To declare president and vice president candidate number 01 Joko Widodo and K.H. Ma'ruf Amin as the president-elect and vice president-elect  by the general election 2019," Head of KPU Arief Budiman stated.The pair of Jokowi-Ma'ruf gained 85,607,362 votes or 55.50 percent, while contender candidate Prabowo-Sandi pair garnered 68,650,239 votes or 44.50 percent, Budiman added.This plenary meeting began at about 4:00 p.m. local time and Jokowi-Ma'ruf had arrived at KPU office building at 3:50 p.m. Jokowi was wearing a white shirt and black trousers, and Ma'ruf was also in a white shirt combined with a green sarong.All members of Jokowi-Ma'ruf's  Indonesia Working Coalition attended the meeting.Meanwhile, the pair of Prabowo-Sandi did not come to the plenary meeting. Likewise, not many political party members supporting the pair appeared at the meeting. Among them who came were Habiburokhman from Gerindra Party and Edy Soeparno from the National Mandate Party. (ant)

More in this category: « President Jokowi Raises the Issue of Empowering Women in the presence of G20 Leaders Indonesia to Develop Tourism in North Sulawesi »
back to top
Home