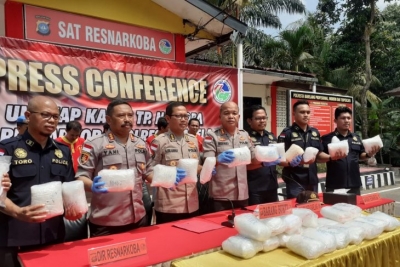 Police officials in Indonesia and Malaysia have intensified their cooperation against cross-border drug trafficking in the two countries, a senior Riau Islands police official said here Tuesday. "There must be cooperation between the two police forces," Riau Islands Police' Director of Drug Case Investigation Unit Senior Commissioner K Yani Sudarto said.The Riau Islands Police has thwarted numerous attempts to smuggle drugs from Malaysia, which are for distribution in some regions in Indonesia, he said.Malaysia is used as a transit point for the illicit drugs produced in a third country, before it can be smuggled into Indonesia and Australia, according to Sudarto.Earlier, Barelang police in Batam seized 38.666 kg of methamphetamine from a drug courier aboard a speedboat in Kasem Island waters of Batam.The police arrested the courier after a two-month investigation into the case, Barelang police chief Senior Commissioner Hengki said.The meth was concealed in a suitcase and a backpack. The suitcase contained 24 packs of methamphetamine, while 13 other packets of the drugs were hidden in a backpack."With the seizure of the drugs, we assume that we have saved 115,982 people, with average use of one mg of drug per 3 to 4 users," he added.The drugs were allegedly smuggled from Malaysia to Jakarta from the sea.The police are still investigating the case, he said

More in this category: « Jokowi, Mahathir to hold bilateral meetings at Perdana Putra building Govt relies on investments to anchor growth amid global economic turmoil »
back to top
Home