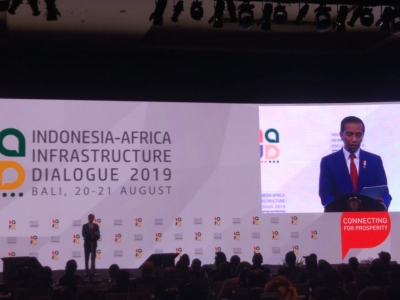 President Joko Widodo in his speech at Indonesia-Africa Infrastructure Dialog in Nusa Dua, Bali, on Tuesday (20/08/2019) explained Indonesian achievement in infrastructure development during his 5 years of his administration. The president said that Indonesia has succeeded in developing 782 kilometers of toll road and 3387 kilometers of national public road.

According to President Joko Widodo, the infrastructure development has some goals, among others: firstly, to unite the nation which has tribe, language, and religion diversities, secondly, to improve equitable development and reach outermost regions. Third is to increase connectivity to improve disparity and economic gap. Fourth is to create welfare and social justice for all the people of Indonesia.// (VOI/BORGIAS/trans-yati/EDT/AHM)