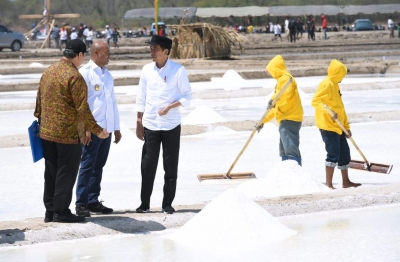 President Jokowi, who was accompanied by First Lady Iriana Joko Widodo, said that he wanted to ensure that the development of salt pond production in the area had been running at the same time seeing the potential it had.

The location of the salt pond visited by President Joko Widodo is producing on a 10 hectare pond area of ​​600 hectares of potential.

The development of the salt industry in NTT requires considerable investment. However, the full utilization of the 600 hectare pond will be pursued in the coming year. In addition, the President continued, local pond farmers will also be empowered so as to improve welfare.

“I'm just here to make sure that the program for salt business has started. Because we know that our salt imports are 3.7 million (metric) tons, which can only be produced domestically at 1.1 million tons. Next year will be completed 600 hectares, pond farmers will also be included. Working as well as participating (owning) like shares, so that later the people's income here can be better,” said President Joko Widodo.

Overall, East Nusa Tenggara (NTT) Province has a large potential for salt production with a pond area of ​​approximately 21,000 hectares. Specifically in Kupang, at least 7,000 hectares of land can be developed for this purpose.