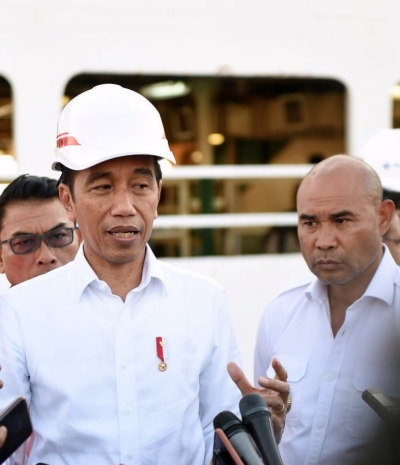 President Joko Widodo reviewed the Tenau Port loading and unloading activity in Kupang City, Wednesday, August 21, 2019. This review was part of a series of President's work visits to the Province of East Nusa Tenggara (NTT).

To reporters, President Joko Widodo alluded to the operation of livestock ships that normally carry cattle from NTT to Jakarta. He said that of the 6 routes of cattle ships, 5 of them came from East Nusa Tenggara. Every year, according to the President, about 70 thousand cows are sent from NTT to Java, especially to Jakarta and its surroundings.

“This ship was once subsidized. Formerly it was Rp 700 thousand, now only Rp 200 thousand. That's what we want. It must have been empty at the beginning, subsidies, not long, now full of hold,” said President Joko Widodo.

Regarding the port development, the Head of State said that the capacity of the Tenau Port can still be optimized. Of the container dock terminal capacity of 240 thousand TEUs (twenty-foot equivalent units) per year, the loading and unloading activities recorded in 2018 only reached 110,000 TEUs per year.

The government also strives for the future, in addition to cattle ships, the Port of Tenau is also crowded with ships going back and forth to other areas. These efforts, for example, are related to efforts to increase salt production in NTT which can later be sent to other regions.

Tenau Port of Kupang was built in 1964 with a pier length of 23 meters. This port activity is managed by Pelindo III in collaboration with the Class III Office of the Harvesting and Port Authority (KSOP) of Kupang.

Accompanying President Jokowi in the review of the Port of Tenau included the Minister of Transportation, Budi Karya Sumadi, Chief of Staff of the Presidential Moeldoko, Special Staff of President Gories Mere, and NTT Governor Viktor Laiskodat. (VOI / ANDY / AHM)