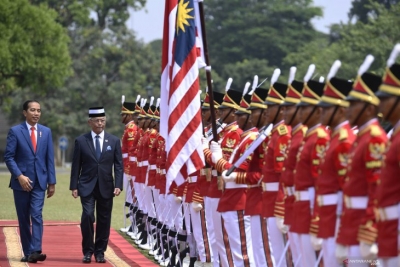 The Indonesian president and first lady extended a warm welcome to the duo at the Bogor Palace, West Java, Tuesday.

Also greeting the Royal guests were several hundred students dressed in traditional clothing and waving the national flags of Indonesia and Malaysia.
Widodo and the King held a one-on-one meeting and planted trees in the backyard of the palace. A bilateral meeting was also organized by the two countries' delegations.

During their stay in Jakarta, the Malaysian king and queen will also attend a dinner with the Malaysian people in Indonesia and visit the Istiqlal Mosque, the biggest mosque in Southeast Asia.

The visit symbolizes strong bilateral ties between Malaysia and Indonesia and will contribute to strengthening friendship between the two neighboring nations that has been in existence since 62 years ago, the Foreign Ministry had earlier stated (ANTARA)