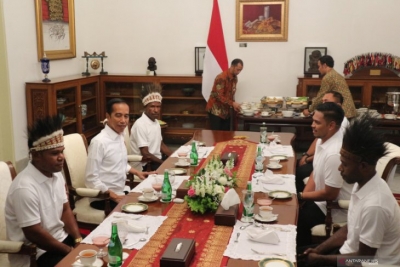 President Jokowi had a lunch with guests from Papua Province at the Merdeka Palace, in Jakarta, on Sept 3, 2019. ANTARA

President Joko Widodo (Jokowi) had lunch with the winners of the "Gapura Cinta Negeri" (Country Love Gate) Festival, who came from Nduga and Yapen Islands Districts, Papua Province. "Just now, there were important guests from Nduga and Yapen, including village chiefs," Jokowi said while holding a limited cabinet meeting at the Presidential Office, here Tuesday. The lunch took place at the Merdeka Palace, before the meeting. Joining the luncheon with the President were, among others, Otniel Matias Kayani, the village chief from Mantenbu in Yapen, Royland Worembay (29), a resident of Mantenbu, Amos Ayum, a farmer from Mantenbu, and Peter De Haan, a spokesman of the Yapen regional administration. From Nduga District, those who were present included Tekius Heluka, the village chief from Mbua, Nduga District, Gianus Kurungga, a senior high school graduate also from Mbua, and Agung Rezki, a resident of Wamena and member of the Indonesian Young Entrepreneurs Association (HIPMI) chapter of Papua. On Monday, September 2, Jokowi presented prizes to the winners of the festival. (ANTARA)