Pakistani Ambassador: The Role of Radio Will Increase 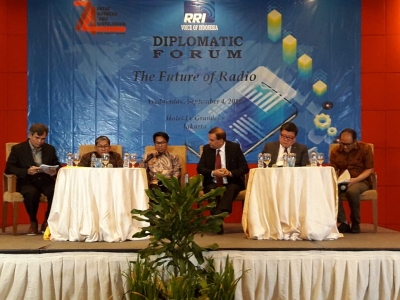 The role of the radio will increase, especially if there is already digitalized. Apart from being a means of disseminating information, education and entertainment, radio also functions to unite people from various parts of the world. It was conveyed by Pakistani Ambassador to Indonesia, Abdul Salik Khan, at the Diplomatic Forum talk show themed The Future of Radio held by Voice of Indonesia in Jakarta Wednesday (04/09.2019) The theme was taken in conjunction with the 74th Anniversary of Radio Republik Indonesia. According to Abdul Salik Khan it is possible that radio will change its form and function, but the role of radio will be increasingly important.

“So ​​radio's importance in future is not going to undermine. It is going to increase, of course, it will take different, I would say, it will change its shape, it will change its utility in a different way. But the way radio is bringing the cultures closer, the way the radio is bringing the country's information As the Ambassador of the Seychelles said, that tourism is one of the most important areas in the Seychelles So what is the role of radio there? Similarly Pakistan is also a country which is a friendly country to Indonesia and through RRI millions of people in Indonesia and Pakistan are linked together,” said Ambassador Salik Khan.

Furthermore Ambassador Abdul Salik Khan appreciated the Voice of Indonesia which had organized the Diplomatic Forum talk show on the radio because it hasconnected Indonesia with listeners around the world. (Voi / ahm /)