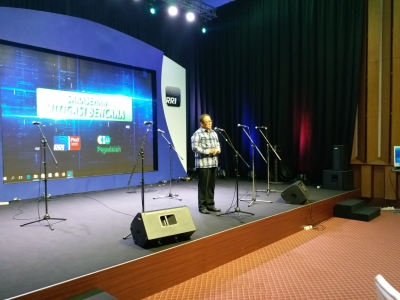 Welcoming the 74th Anniversary of Radio Republik Indonesia (RRI) on September 11, 2019, RRI Public Service Broadcasting will release the 'Kentongan' Disaster Response Program nationally. This was announced by the President Director of LPP RRI, Mohammad Rohanudin in his remarks at a workshop entitled 'RRI Disaster Response Radio' at Jusuf Ronodipuro RRI Auditorium, Jakarta, Saturday (7/9). Rohanudin said, as a broadcasting institution that represented the presence of the state, RRI was demanded to have its own form of journalism. RRI takes the initiative to become the only Disaster Response radio nationally through the 'Kentongan' Program because it has 100 radio stations throughout Indonesia. Of the 100 stations, 37 of them are on the border areas, so there will be the country’s presence among the people. (kbrn)

More in this category: « Pakistani Ambassador: The Role of Radio Will Increase President Joko Widodo Approves the Proposal for the Construction of the Presidential Palace in Jayapura »
back to top
Home