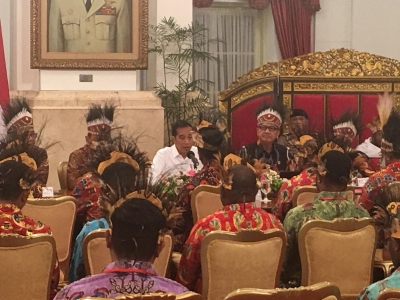 “Regarding the presidential palace. The most difficult one is providing the land. The land has been provided, right? 10 hectares for free? Ten hectares, right? Already available? Ooh it belongs to Abisai Rollo. Today de facto the land has been submitted. I whisper first with the ministers so that I would not take a wrong decision. I'll talk later, we don’t have the money now. So the palace will start to build next year,” said Joko Widodo.

In addition to requesting to build the Presidential Palace in Jayapura, there were a number of other requests proposed by leaders of Papua and West Papua when meeting with the President at the State Palace. The request is the division of the 5 (five) indigenous territories in Papua and West Papua, the establishment of the National Land Affairs Agency for Papua, the placement of echelon 1 and 2 officials in the ministries and institutions as well as the development of the Nusantara Dormitory throughout the region including security guarantees for Papuan students. In addition, the leaders of Papua and West Papua also requested the Revision of the Special Autonomy Law, the issuance of a Presidential Instruction (Inpres) for the honorary appointment of the Papuan Civil Apparatus and the acceleration of the construction of the East Palapa Ring Satellite. (VOI/ANDY/AHM)

More in this category: « RRI to Release Disaster Response Program Called 'Kentongan' The 3rd President of Indonesia, BJ Habibie, Passes Away »
back to top
Home